Küstenjäger!  Special Forces II (SFII) is the second “special forces” pack released by Heat of Battle, following not so quickly on the heels of their 2007 release Special Forces, which depicted the British Long Range Desert Group.  It is also apparently the last in this series, as HOB announced that this would be their penultimate release before ceasing operations (their final release will likely be an HASL on Kohima).  SFII depicts actions involving the allegedly “famed” German Küstenjäger (a tiny coastal raider unit, part of the Brandenbergers) in the Aegean Sea in 1943 (one scenario is set in 1944).

The Küstenjäger are Commandos in ASL terms and are given various superhero powers:  they almost never stray, they are Olympic swimmers, they have underlined morale and ELR 5, they can self-deploy, they can self rally, they have a -1 HOB DR, they can use captured SW without penalty, can declare Hand to Hand CC, get a -1 DRM in Hand-to-Hand CC against partisans, and their leaders can apply their leadership values to landing craft and motor gun boats.  They have a single drawback, being required to take a 1PAATC.

More pages are devoted to Motor Gun Boats, which are used in 2 of the 6 scenarios.  The Motor Gun Boat rules are condensed (with permission) from those appearing in another third party product, LFT’s St. Nazaire:  Operation Chariot.   Those scenarios that don’t use MGB use either assault boats or landing craft, so players had better be adept at adventures amphibious prior to playing scenarios from this pack.   There are also a few charts that can be used, with additional work, to adapt the Küstenjäger to an SASL mission; however, there is no actual mission provided.

The pack comes with two cards to represent the capabilities of two different small craft, which have to be cut out with scissors.  The graphics are well done on these cards.  Not so well done are the graphics for the included coastal overlay (unnamed but described as the KJ Overlay).  For some reason, HOB, which has designed plenty of maps in the past, used VASL-quality graphics for this overlay, meaning that the graphics were designed for screen resolution, not print resolution, and definitely look it.

Luckily, the counters are nicer than the overlay.  SFII comes with a tiny countersheet of die-cut counters with a glossy, highly reflective finish.  The bulk of these represent the 6-4-8 Küstenjäger squads and their half-squads.  There are also a few counters for Küstenjäger underwater swimmers as well as for German and British boat crews.  The other counter mostly comprise a handful of Motor Gunboats and their related weapons/malfunction counters.

SFII comes with a half-dozen scenarios.  One of these, SF-7 (Deadly Appetici) uses boards I and II from High Ground!, though this is not mentioned anywhere on the product packaging.  Another, SF-10 (False Flag) uses the Gavatu-Tonambogo overlays that appeared in ASL Annual 93b (and later in Rising Sun); this is also not mentioned on the packaging.  The other scenarios use standard ASL boards, often with beach overlays.  One of the scenarios, SF-9 (Now It’s German!) uses counters and rules from HOB’s Special Forces pack; this is not mentioned in the product packaging.

All 6 scenarios are small in size.  Two of them, SF-7 (Deadly Appetici) and SF-8 (The Guns of Corfu) involve Seaborne Assaults.  Three scenarios use Night rules; no scenarios use OBA or Air Support.  One scenario, SF-7 (Deadly Appetici) uses Early Morning Sun Blindness from Chapter F.  The Germans attack in 5 of the 6 scenarios.  Their opponents are the British (3 scenarios), British and Italians (1 scenario), Italians (1 scenario) and Greeks (1 scenario).   The scenarios are fairly SSR-intensive (though, as is typical with HOB scenarios, they are divided between “Scenario Variables” and “Historical Special Rules.”

The specialized and small nature of these scenarios mean that they will appeal basically only to those people interested in this narrow subject of special forces, as well as to collectors. 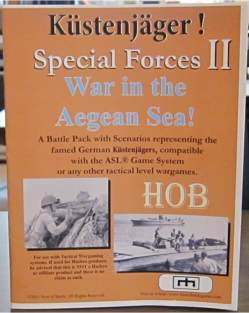