Le Franc Tireur began publication in the mid-1990s under the editorship of Laurent Closier.  Compared to later issues, it was relatively small, and started with only four scenarios per issue.  In essence, it was a somewhat smaller version of Tactiques, which also had a historical theme in every issue, and similar types of articles.  And, of course, many of the graduates of Tactiques would later help in some way with Le Franc Tireur.

After the fourth issue, Xavier Vitry took the lead role in editing Le Franc Tireur (though still helped by Closier and Jean Devaux), expanding its size and publishing the scenarios (though not the content) in English, for a wider audience.  Eventually, the magazine moved to an all-English content in order to reach an international audience.

Le Franc Tireur has developed a reputation for interesting scenario subjects and concepts, such as an action taking place on a frozen lake near Leningrad, with combatants on skis and aerosleds–the scenario uses ocean overlays and snow drift counters to represent the lake.  It began as a French publication but now has attracted admirers from around the world.

Like the magazine Tactiques, which it clearly emulated, the first issue of Le Franc Tireur (LFT1) had a specific historical focus:  the different military clashes in French Indochina in 1940-41.  It also included an article on terrain types (such as sewers and rooftops) that might be used in urban guerrilla warfare, as well as an article on different types of anti-tank ammunition.

The magazine is printed in black-and-white. All the content is in French, including scenarios.  However, (rough) translations of the scenarios from the early issues of Le Franc Tireur are available online from View From the Trenches.  The original French issue, sans scenarios, is downloadable here.

Of the four included scenarios, two (FT01, Le Temps des Humiliations, and FT02, Juste une Illusion) focused on the theme of the issue, while the other two were varied.  The two topical scenarios were later reprinted by MMP as official scenarios: J90 (The Time of Humiliations), which has been developing a nice reputation, and J70 (Just an Illusion). 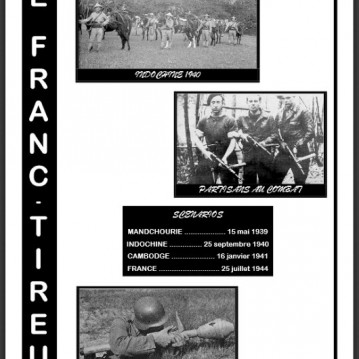