Le Franc Tireur returned in 2007 with an issue (LFT10) that may be physically its most impressive yet.  This was a pleasing return to form after LFT9 which was not only much delayed but suffered from a number of physical problems.  LFT10, however, is an extremely attractive product with high production values.

The majority of the content of LFT is now in English, to reach an international audience (although most of the product reviews are still in French).  The quality of the English is higher in LFT10 than in LFT9.  Also better is the overall physical quality of the magazine.  LFT10 is in full color, and much better quality than the DTP look of its predecessor.  The graphics are crisp and colorful.

Each issue of LFT focuses on a single historical theme, and the theme for LFT10 is the Spanish “Blue” Division in World War II.  The German 250th Infantry Division was actually composed of volunteers from Spain who came to help the Nazis invade the Soviet Union.  It engaged in hard fighting on the Eastern Front until it was withdrawn (although some elements of it remained behind and fought on until the end of the war).  The “Blue” Division has always been an object of fascination for wargamers, some of whom tend to romanticize the unit and apologize for or explain away its cooperation with the Nazis.  LFT10 regrettably tends to fall into this category, even lapsing into fulsome romantic praise (“they were loyal to their ideals to the end, representing in this way the last knights of modern times”).  This might be somewhat disturbing or offensive to readers less enamored of the “Blue” Division.

Several articles in the magazine describe the unit and its various battles, and offer possibilities for further reading.  All 10 scenarios also focus on this unit; therefore LFT10 has a very strong East Front focus.  The soldiers of the “Blue” Division are represented more or less as supermen in these scenarios; they are always elite, their ELR is always 4 or 5 (even in Berlin in late April 1945), and they always have a -2 drm to the Leader Creation Table and a -1 DRM to the Heat of Battle Table.

Several of the scenarios are worth trying, including FT81 (Dubrokva), FT83 (Go on to Kolpino!) and FT86 (Black Tercio), among others.  Some of the scenarios have a bit of sameness about them, since every scenario features a German infantry division, with little variety in terms of OB.  That can’t really be helped.

In addition to the “Blue” Division material and the usual product reviews, LFT10 features a look at Soviet ski battalions, the Human Wave rules, a “interview” with an American ASL player, and an AAR from Grenadier 2006, among other odds and ends.  One nice article by Jean Pascal Paoli gives non-Americans some insight on what is involved to travel to and participate in the world’s largest ASL tournament, ASLOK, in Cleveland, Ohio.  It provides lots of useful advice and information.

Another nice article is a translation and reprint (with high production quality) of “Gates of the Reich,” a geomorphic map CG using Red Barricades as a base that was originally published (in French) in Vae Victis.  Many ASLers might want to have a go at that campaign.

Overall, LFT10 may be the best issue of LFT10 yet.  Time will tell if the scenarios are good, but there is no doubt that the production quality of this issue is the best LFT has accomplished. 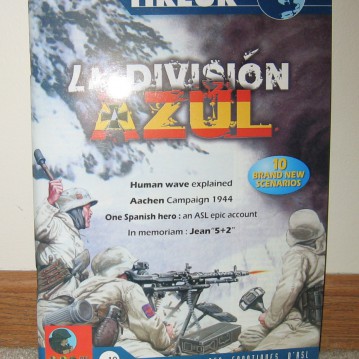