One of the first ASL releases of 2008 was the 11th iteration of the ASL magazine Le Franc Tireur (LFT11), this time with the theme of “France 1940.” It is a little surprising that a French ASL magazine would take 12 years before getting around to paying attention to France 1940!

The content of the magazine and scenarios is all in English, except for a couple of short product reviews.  The magazine is in full color and generally of high production value, made possible for a reasonable price by being printed in Cambodia.

Much of the article content is centered on the France 1940 theme of the issue, including historical articles on French light mechanized cavalry units and the Franco-Italian fighting in the Alps in 1940, as well as a comparison of French and German infantry tactics in 1940.  There is also a short article (but alas, no counters) on the 75-ton French tank, the FCM 2C, and a lengthy comparison of the town of Stonne in 1940 with its modern counterpart, coupled with an AAR of a Stonne 1940 campaign game.  It is quite interesting.

One major feature of the magazine is an SASL Campaign game, SASL DAR (Darby’s Rangers), featuring the 1st Ranger Battalion at Anzio in January 1944.  This campaign contains 12 missions:  DAR1 (Off We Go!), DAR2a (Out of Town), DAR2b (Not Yet at Ease), DAR3a (Operation Darkwood), DAR3b (Into the Ditch, into the Night), DAR3c (Uneasy), DAR4a (Breaking Through), DAR4b (Filtering Through the Line), DAR4c (Breaking the Kraut’s Back), Mission DAR4d (Death at Dawn), Mission DAR4e (Mussolini Canal), DAR4f (Panzer Revenge).   However, players will only play 4 of them to compete a campaign–what missions players play are determined by the results of the previous mission (which is why each stage has more missions than the previous).  SASL fans will definitely want to pick up this detailed and intriguing item.

Other articles include an interview with German ASLer Christian Koppmeyer, a variety of product reviews and several tournament AARs, rules articles on gun duels and platoon movement, and more.

The “extra” that comes with Le Franc Tireur11 is a full-color, un-mounted (ASLSK style) 9″ x 22″ geomorphic mapboard.  It is a specialized map that will only be used occasionally, but scenario designers will appreciate its usefulness.  The (beautifully drawn) map is mostly water, except for a thin strip of land and a thin beach.  It is perfect for a number of beach landing situations, and the beauty of it is that it does not require the frustrating assembling of a variety of beach and ocean overlays–just plop down the map and away you go.  One scenario in LFT11 uses this map, but since LFT12 is going to focus on the Pacific, there will be more use for it.  One can only hope that other designers and publishers will also make use of this resource.  The one irritating thing about the map is that it is about 5mm too wide, showing portions of the “0” hexrow that should not be there.  Players will have to slightly overlap their maps, or somehow cut off this 5mm.  Some players will not like this at all, and it is to be hoped that future maps by LFT will be standard sized.

Of the 10 scenarios in LFT11, 9 feature the “France 1940” theme.  Although the Italians make a guest appearance, the British, Dutch, Belgians and Poles do not, so most scenarios are French vs. German.  The French attack in 3 scenarios, defend in 6.  The 10th scenario is the one that uses the included geomorphic map; it takes place in Indochina in 1940 and features a small Japanese beach landing which is probably perfect for learning the landing rules.

The scenarios tend towards the large, with fewer tournament-sized scenarios than in issues past.  Three scenarios are small or medium-sized, with the remaining scenarios being large or fairly large.  The SSR burden is generally light.  One scenario is a Seaborne Assault, another is a river crossing with boats.  Several scenarios have OBA.  Strangely, given the theme, no Stukas or other air support appears.  The biggest scenario is FT90 (“Sans Esprit De Recul”), an 8-turn German assault on a town.  The Germans get 25 squads (including a few motorcycle riders), OBA, 13 AFVs and 8 trucks.  The defending French have 29 squad-equivalents (mostly elite, some cavalry), a 10-3 leader, 2 25mm AT guns, and some fortifications (there is errata on the scenario card–a blank counter on the French OB is supposed to be 2 x HMG).  Overall it looks like an interesting scenario mix.

The most popular scenario in LFT11, by far, is FT91 (“Ne pas subir”), a fun and balanced scenario that is perfectly tournament-sized.  However, some of the other scenarios in LFT11 have some balance issues.

LFT11 continues the high production values established in the previous issue and is a product worth getting. 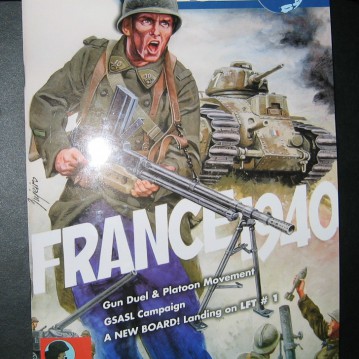