The sophomore issue of Le Franc Tireur has a historical focus, including two articles, on the Balkans and Tito’s partisans in Yugoslavia.  Other articles include an analysis of smoke in ASL, a look at American tank destroyers, and an analysis of the Heat of Battle module King of the Hill.

The four scenarios include FT05 (Trappola), an Italian vs. partisan action, and FT06 (Macédoine Balkanique), which features Bulgarians and Soviets against Germans.  One of the scenarios, FT08 (L’ultime Traîtrise), was later reprinted as an official ASL Journal scenario, J76 (Ultimate Treachery), which has become a popular tournament scenario. 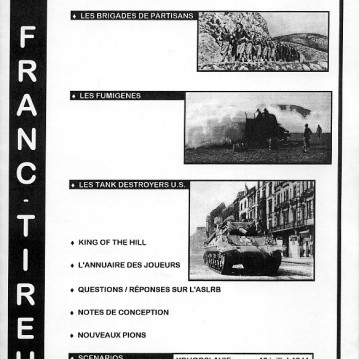