With the publication of Le Franc Tireur No. 5 (LFT5) in 2000, not only did Le Franc Tireur grow bigger, but it also made a major change:  publishing its scenarios (though not its article content) in English, to give them a wider international audience.   It was also with this issue that Xavier Vitry took over editorship duties from Laurent Closier, although Closier remained associated with the magazine.

LFT at this stage still looked less professional than its predecessor Tactiques, but was clearly becoming an ASL magazine of substance, providing ASL community news, new products, as well as gameplay, rules, and historical articles.  With color covers, if still black and white inner pages, and color cardstock scenarios (though using early VASL screen graphics), LFT clearly had made strides.

The historical theme of LFT5 was a series of obscure conflicts between French and German troops in the Maritime French Alps in April 1945 (the battle of Authion).  The magazine contains numerous photographs, some in color, showing the actual terrain over which the battle was fought (one of the extremely few advantages of having a war take place in your country).  Other article content, typically short, included numerous reviews of recent ASL related products, an article on Red Barricades Campaign Game IV, an overview of VASL, a short interview with veteran ASLer Georges Tournemire, an article on mines in ASL, and facetious rules (in English) for dogs in ASL.

Designed by Xavier Vitry and/or Pierre Anselin, the five scenarios–which have been little played over the years–all focus on the battle for Authion.  Two are large in size, one is medium sized, one is small, and one is very small.  All are in English (except the titles).

The scenarios have rudimentary historical descriptions, poor English, a somewhat crude layout, and crude VASL screen graphics never designed for print.  They gave few clues about the future production values that LFT products would one day achieve.  But they were a first step. 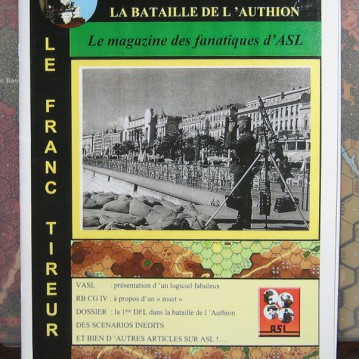