Le Franc Tireur No. 8 (LFT8) is the first issue in which much of the article content, as well as the scenarios, are in English, to appeal more to ASL’s international audience, especially Americans who had recently discovered LFT. Much of the content, such as product reviews and announcements are still in French, but the main articles were in English and the direction the magazine was moving towards was clear.  This may have been frustrating for French ASLers who preferred to read the magazine in their native tongue, but it did make it easier for the many other ASLers around the world to enjoy LFT along with their French friends.

In addition, there are many reviews of recent ASL products (in French), glimpses of future ASL products (in French and English; interestingly, none of them have yet seen print), tournament reports (in English and French), an ASL crossword puzzle (in English, but French style), a diagram for a hamster-driven dice tower, an interview with Yves Tielemans, the third part of an analytic series on ASL strength factors (in English; the first two parts were in French), an English translation of the Borodino mini-campaign rules from Le Franc Tireur #7, an interesting Series Reply of OA16 (Surrender or Die!), a detailed example of Overruns, and a lengthy after action report of an Operation Veritable Campaign Game.

In short, Le Franc Tireur #8 is overflowing with interesting ASL content, the majority of which is in English.

The scenarios in this issue are almost all tournament sized; there is 1 large scenario, 5 medium-sized scenarios, and 4 small scenarios.  Nine of the scenarios are Normandy actions, while there is one ringer, a Norwegian-German 1940 action (FT48, On the Swedish Border).  Of the Normandy scenarios, one features American troops and a second features the French; the others are all British/Canadian vs. German actions.  One of the scenarios, FT44 (The Liberation of May), uses DASL boards, while another, FT41 (Greyhound at Bay), uses the historical map from Pegasus Bridge.

Given the size and interesting nature of these scenarios, it is surprising that they have not received more play.  The scenario that has received the most play is the fun and balanced FT43 (Infantry Probe at Argentan), a popular tournament scenario. 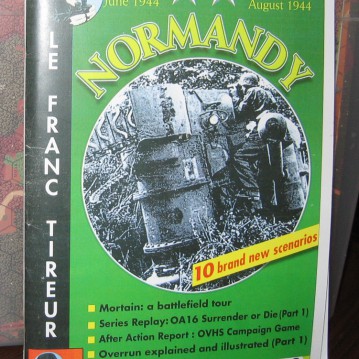