Le Franc Tireur No. 9 (LFT9) came out nearly a year late, due largely to the posting overseas of editor/publisher Xavier Vitry, a serving French Army officer, and the illness (and, alas, eventual death) of Jean Devaux.

LFT9 continues the practice established in the previous issue of including much of the article content, as well as the scenario cards, in English, rather than French, to make it more accessible to an international audience.  The many different product reviews are still in French, but most of the gameplay articles are in English.  Two of the major articles are actually continuations of articles begun in the previous issue, so readers who do not have LFT8 may be somewhat left out.

The scenarios in LFT9 were for some reason printed not on cardstock but on glossy paper.  As a result, they are flimsy (this may be particularly important to American consumers because they are printed on the standard European paper size, which is longer than the standard American size, which means that Le Franc Tireur scenarios might stick out).  Moreover, some of the scenarios are hard to read, such as FT60 (Bloody Brothers). Hopefully, future issues will go back to cardstock scenarios, as they are much preferable.

LFT9 was one of several ASL products released around the same time that included Yugoslav partisan scenarios (the others included Fanatic Enterprises’ Balkan Wafare and MMP’s ASL Journal #7).  Of these scenarios, those in LFT9 are the most accurate, especially regarding partisan weaponry.  Although not perfect, many of the Le Franc Tireur scenarios reflect the fact that partisan weaponry had no Soviet support weapons until late 1944, but instead were primarily armed with Italian and British support weapons.  However, the representation of the 7th SS “Prinz Eugen” Division seems very generous for a unit that really wasn’t elite.

One of the scenarios, FT68 (Red Lightning), uses Board y from the ASL Starter Kit 1.

Due to printing problems, the following ERRATA is CRUCIAL to play some of the scenarios:

FT 61
SSR 4 : All 5-4-8 / 2-3-8 are Cossacks. They have an underlined Morale [A 19.132 is NA] and are treated as Russians for Heat of Battle/Leader creation/deployment only. They do not possess Infantry Smoke Grenades nor Panzerfausts and use German MGs with no penalty. To form a multilocation firegroup with Cossack units and non Cossack units, a Leader must be present in each location of this FG. 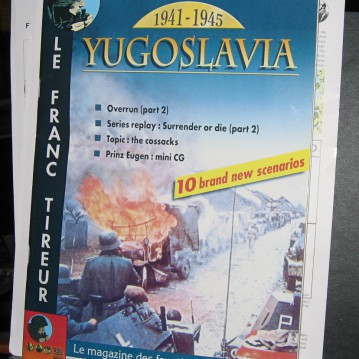