The first Leatherneck Pack was produced by SS-Bar Enterprises; this belated “sequel” is purely Critical Hit.  It features 8 scenarios depicting actions involving the U.S. Marine Corps.  The scenarios have marginally fewer complex rules than the first Leatherneck pack, and are slightly smaller in size, but this is still no pack for beginners.

LN2-5 (Storming the Point) is a seaborne assault.  LN2-5 features a clash between the USMC and Chinese Communists in 1946.

The best scenario in the pack is LN2-4 (Suicide Creek). 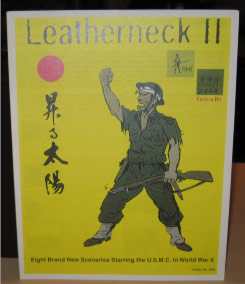