Chesty Puller must be spinning in his grave, thanks to this third “Leatherneck” scenario pack. The first two, appropriately, presented U.S. Marine Corps actions, but this ostensible sequel features only a single scenario sporting gyrenes.

LN3-3 (Aka Assault) is a Seaborne Assault.  Most of the scenarios feature caves, extensive fortifications, amphibious rules, NOBA, Night rules or other complex rules.

Like its predecessors, though, Leatherneck III tends to feature larger scenarios with complex rules, which account for its relative unpopularity. Its scenarios are just not that apealling. 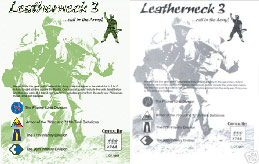