The baker’s dozen of scenarios all feature the U.S. Marine Corps.  Few of the scenarios have seen that much play; one reason may be that many of the scenarios tend to be large (one scenario has 52 Japanese squads alone!) and/or complicated (featured in various scenarios are beach rules, air support, bombardments, night rules, panjis, NOBA, seaborne assaults, caves, and boobytraps).  USMC aficionados might want this; for most others it can be a lower priority.

Because CH did not purchase outright the rights to this product, it is one of few products never reprinted by Critical Hit and is thus somewhat rare. 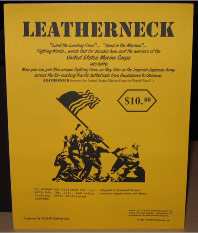