Most of the scenarios in LP1 are small (3) or medium-sized (4); there is also one large scenario.  Many of the scenarios will play quickly and are suited for tournament play.   Several depict river/canal crossings.  One scenario, LSSAH1 (Opening Fire), features an interesting situation–the Poles have a set DC on a bridge, but they have to get to the detonator before the Germans can.  Another scenario, LSSAH4 (By the End of a Rifle!), includes a contested river crossing in rubber boats.

Four of the scenarios have OBA; one has Air Support.  There are no Night scenarios.  The Germans are the attackers in every scenario except one.  The most popular scenario, which has been used in tournaments, is LSSAH2 (They Stop Here!), a fast-playing Polish-German contest featuring German motorcycles and armored cars.  It is very well-balanced.  However, a number of other scenarios are also fun and balanced, including LSSAH1 (Opening Fire), LSSAH3 (Frühjahrbestellung), and LSSAH7 (Just in Time).

With its varied combatants and solid core of scenarios, the pack is worth getting. 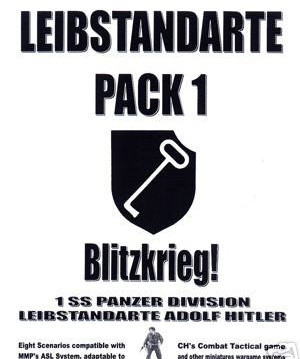