The second of Lone Canuck’s themed packs on the 1st SS Panzer Division “Leibstandarte Adolf Hitler,” Leibstandarte Pack 2:  Barbarossa! (LP2) adds 8 more scenarios, this time featuring the unit’s actions in the Soviet Union in 1941.   The unit’s squads are represented in this pack by a mix of 5-4-8 and 4-6-8 squads.

LP2 has an entirely different feel than LP1; the scenarios tend to be far larger.  Of its 8 scenarios, 3 are small and 5 are large (there are no medium-sized scenarios).  Some of the large ones are actually very large; LSSAH13 (The Russians Are Coming!), for example, features 33  Soviet squads.  When one considers the large amounts of SW that George Kelln typically throws into his scenarios, there will be a lot of lead being slung back and forth (the 33 squads in the aforementioned scenario, for instance, have 9 LMG, 3 MMG, 3 ATR, 3 50mm MTR, 3 FT, and 6 DC; their opponents, 12 German squads, have 4 LMG, 2 HMG, 2 50mm MTR, 2 FT, and 4 DC!).  However, LP2 is different from some of Kelln’s subsequent scenario packs in that the scenarios, though large, typically don’t have a huge number of AFVs.

Two of the scenarios have OBA (one has 210mm OBA!).  There are no scenarios with Air Support or Night.

Several of the scenarios are unusual in that they represent Soviet amphibious actions.  LSSAH11 (Sea Battle), for example, is a massive Soviet Seaborne Evacuation.  LSSAH13 (The Russians Are Coming!, mentioned above) is a Seaborne Assault (and features offboard naval direct fire support).  Both of these scenarios ought to be interesting to amphibious enthusiasts, especially those tired of USMC.  Some players may also enjoy LSSAH10 (Baptism of Fire), a large slugfest across boards 47 and 24.  The Germans are the attacker in 7 of the 8 scenarios in the pack.

The scenarios have not been played too much, other than LSSAH12 (Contact), but early indications offer the possibility of balance issues with several scenarios (including Contact). 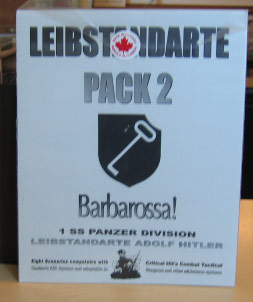