Leibstandarte Pack 3:  Clash at Kharkov! (LP3) is the third of George Kelln’s scenario packs featuring the infamous 1st SS Panzer Division “Leibstandarte Adolf Hitler.”  The scenarios in this pack take place in February and March 1943 during the German counterattack at Kharkov following the debacle at Stalingrad.  In this pack, the Leibstandarte’s units are represented by 5-4-8 SS squads.

As was the case with its predecessor, LP3 tends towards the large.  There are no small scenarios, 3 medium-sized scenarios, and 5 large scenarios.  Many of the scenarios feature large numbers of AFVs.  In LSSAH19 (The Tiger’s Roar), for example, the Germans have 26 vehicles, most of them tanks.

One scenario uses the Night rules; one scenario has Air Support.  Two scenarios have OBA.  The Soviet player had better like defending; the Germans are on the attack in every single scenario in this pack.  There is not as much variety in this pack as in either of the two previous Leibstandarte packs.  Moreover, a number of the scenarios have balance issues. 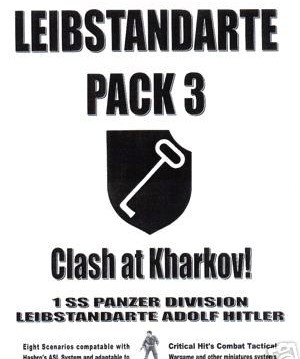