As with most Lone Canuck products of this period, the scenarios tend to the massive.  There is only 1 small scenario and 2 medium-sized scenarios; the other 6 are large.  Some of them are more than large.  LSSAH25 (Getting the Job Done!), for example, is a 9-turn extravaganza featuring a German attack on a Soviet fortified line.  The Soviets have 16 elite squads, 2 LMG, 4 HMG, 6 ATR, 2 50mm MTR, tons of AP and AT mines, 6 artillery pieces, 7 pillboxes, 25 wire counters, 12 anti-tank ditches, and 25 trenches, in addition to OBA.  The attacking Germans have 6 8-3-8 assault engineer/sapper squads and 20 5-4-8 squads, 8 LMG, 4 MMG, 4 FT, 6 DC, 6 StuGs, 4 Tigers, OBA, and 3 Stukas with bombs.  Victory conditions involve control of one hex.  Another scenario, LSSAH27 (Thrust to the North), a Kursk scenario, features 49 AFVs.

Ironically, the most interesting scenarios in the pack are not any of the heavy metal grindfests in the Soviet Union, but rather some of the scenarios that pit the Leibstandarte against Italian and partisan troops.  LSSAH28 (“Last Drop of Blood”) depicts 10 squads from an Italian officer training school and three tankettes trying to hold off a convoy of elite Panzergrenadiers.  It is fun and interesting.

LSSAH29 (“…To its Last Man”), features an Italian attack against the Leibstandarte, with partisan squads popping up randomly on certain Wind Change DRs. It is fun and balanced.

LSSAH30 (Swept Clean) depicts an anti-partisan operation on the Istria Peninsula where the partisans are liberally armed with weapons and vehicles captured following the Italian surrender a month earlier. 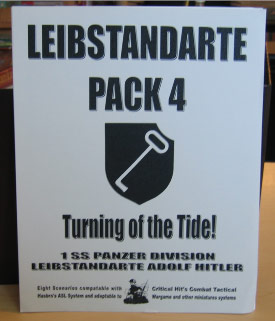