The frenzied imagination of Paul Kenny was at work once again with his massive scenario compilation, the Leningrad Pack, featuring 13 German vs. Soviet actions and 3 Finns vs. Soviet actions on the East Front from 1941-1944 in the environs of Leningrad.

In format, the pack is much like other Fanatic Enterprises packs, black and white (save for nationality symbols and some scenario photographs) with no counter artwork.  Proofreading and editing need work.

This large scenario pack features large scenarios; there is not a small scenario in the whole bunch.  Five scenarios can be considered medium-sized, while 11 scenarios are large.  Some of them are not just large, but very large; for example, one scenario, FE73 (Polar Star), pits 32 Soviet squads and 11 AFVs against 24 German squads, 3 AFVs and 3 Guns.  FE64 (The Iron Ring is Closed), 11 turns long, pits 42 German squads and 9 AFVs attacking 42 Soviet squads with 7 Guns.

Three scenarios have OBA; but there is no scenarios with air support or Night rules.  Probably because so many of the scenarios are so large, they have not been much played. 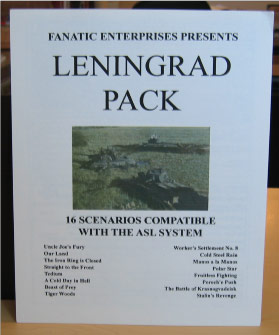