Lider (Spanish for “leader”) began as the house publication of the Maquetismo y Simulación (Modelling & Simulation) Club of Barcelona in the 1980s.  In its first incarnation, it was called M&S and ran for 17 issues (1981-1985).  In 1986 it improved its quality and changed its name to Lider, restarting its numbering system (which ran for 5 issues).  Lider then once more reinvented itself; its third incarnation lasted 62 issues until January 1998.  At first, it concentrated on wargaming, but as time went on, more and more of its content dealt with role-playing games and collectible card games.  A final incarnation, solely featuring RPGs and CCGs, lasted around five issues, until late 2001.

During its third incarnation, Lider published several ASL scenarios, as well as a couple of other reviews and articles. 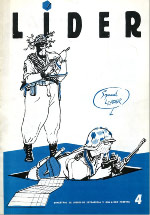