“Los (Inter) Nacionales” is a set of two 1/2″ (12.5mm) custom precision dice that is part of Battleschool’s “Nationals” series, a series designed to provide custom dice for various forces that fought in World War II.

This offering is fairly obviously different, in that it provides dice for forces that most definitely did not fight in World War II but were rather part of another war entirely:  the Spanish Civil War.

The “Nationalist” die, representing the right-wing forces under Franco, uses a black roundel in place of the “1” face of the die; this symbol was used on Nationalist aircraft.

The other die is not a Republican die, per se, but rather a die that represents the so-called International Brigades, which were brigades of left-leaning volunteers from all over the globe who came to fight for the Spanish loyalists against the fascists of Franco.  The symbol used is the triangular star of the Popular Front, which came to be used as a symbol by the International Brigades. 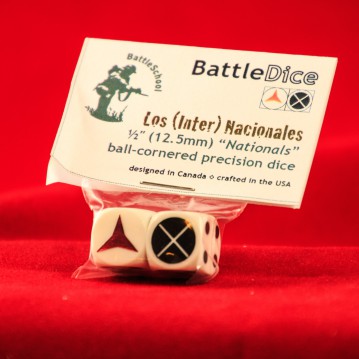