The fruitful efforts of Paul Kenny produced this late war Philippines scenario pack; with the exception of one partisan action, all of the scenarios take place during MacArthur’s last World War II campaign, the 1945 liberation of Luzon, the main island of the Philippines.  Pacific aficionados the world over have to appreciate Kenny’s commitment to PTO scenarios.

As is standard with Fanatic Enterprises scenario packs of this period, the scenarios are black and white (except for nationality artwork and the occasional color photograph) with no counter artwork.  The editing and proofreading is slipshod. So too is the historical accuracy.  One scenario features “elements of 27th Infantry Division,” an American unit that never fought in the Philippines (it was part of the central Pacific forces and would shortly land on Okinawa).

The scenarios in the pack tend towards the small:  6 scenarios are small, while 2 are medium-sized and 4 large.  Some are very small indeed, while one of them, the ill-named FE107 (Norton’s Knob), is pretty large, featuring 24 elite U.S. squads.  The U.S. is on the attack in eight of the scenarios, while the Japanese seize the initiative in four actions.  It seems fairly clear that one of the things that drew Kenny to this campaign was the ability to feature Japanese armor; 11 out of 12 of the scenarios include Japanese AFVs (!).   Virtually all of the actions take place extremely early in the campaign.  No actions take place past March 1945, though the campaign would last through the summer of 1945, and no actions take place in the campaign’s most famous battle:  the Battle for Manila.  The pack is not really the “Luzon Pack” but more like the “A Very Tiny Slice of Luzon Pack.”

Despite the attractions of Japanese AFVS and tournament sized scenarios, the pack has not had much play to date. 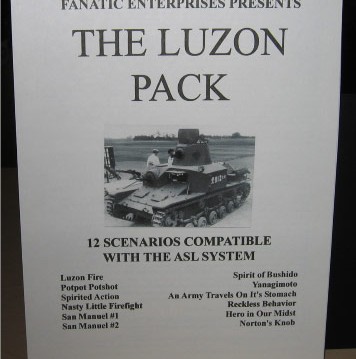