Broken Ground Design’s so-called Map Pad Pack may, if it is not reprinted, end up being one of the rarer pieces of ASL gear out there.  It is also certainly one of the odder.

Designed mostly as a promotional idea by then-new third party publisher Broken Ground Design (whose main thrust was the printing of alternative countersets for ASL, but wanted to get something out quicker), the Map Pad Pack is centered around an actual mouse pad, onto which a small ASL board was printed. This board, then, less than half the size of a standard 8″ x 22″ geoboard, is probably the smallest ASL board ever released. It features a tiny crossroads hamlet. Somehow this Hervé Villechaize of boards manages to have wood and stone buildings, a church, orchards, fields, hedges, walls, woods, brush, and even hills on it. Naturally, it is not geomorphic and does not connect to standard ASL geoboards.

However, though the artwork is different, this board is not original. Rather, it is a modified reproduction of the center of official board 10a/b. Some terrain changes were made to the original design, but the derivation is clear once one does a board-to-board comparison. It’s not clear why they didn’t just create an original design.

Broken Ground board on left, official board 10a/b on right

Perhaps we shouldn’t have to note this, but please don’t actually use it as a mousepad. Your fat, sweaty mitts would wear the map off the surface of the pad in no time.

The map-pad is accompanied by four scenarios designed by real honest-to-gosh ASL scenario designers Pete Shelling and Brian Martuzas (both of whom are normal-sized).  Each scenario is squeezed onto one of the sides of 2 half-sheets of cardstock, so even the scenarios are physically small, to match the board.

PAD1 (Time is Tight). Belgium 1944, Americans vs. Germans. In this Bulge action, 9 Waffen SS squads accompanied by an AA half-track must take buildings from 6 American squads.

PAD2 (The Quick and the Dead). Soviet Union 1942, Soviets vs. Slovaks. The mighty Slovaks are on the attack here, with 9 squads pitted against 6-7 Soviet squads and two Guns. The Slovaks must capture/eliminate both guns, while keeping their casualties lower than the Soviets.

PAD3 (Earning Face). Burma 1944, Chinese vs. Japanese. A dozen Chinese squads with a flamethrower and a DC are out to kick the Japanese–seven squads and a Gun–out of multi-hex buildings.

PAD4 (Iron Coffins). Greece 1940, Greeks vs. Italians. Mediterranean madness ensues with this Italian attack featuring 12 squads and 7 AFVs (one of them flamethrowing) trying to exit despite the efforts of 8 Greek squads and a Gun.

All the scenarios are small, as can be seen. Despite all being played on the same board, variety still exists because no nationality is repeated in any of the scenarios.  There are four scenarios, four theaters, and eight nationalities.

This is essentially a novelty item, yet these scenarios are designed by experienced designers and so cannot be dismissed.  There could actually be some play value here for people who like quick little games. 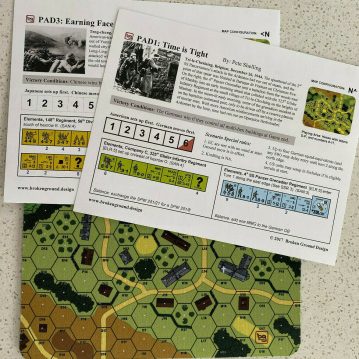