The Maple Leaf Route was the occasional newsletter of the Canadian ASL Association, an organization established to promote ASL and support ASLers within Canada.  The main person behind the newsletter, as well as the organization itself, has been Manitoban Jim McLeod.  The publication schedule of the newsletter, as time passed, went from quarterly to biannually to, finally, “whenever.”

Content included occasional actual articles on ASL subjects (such as an analysis of bogging), as well as the usual stuff of ASL newsletters:  local ASL news, tournament reports, scenario AARs.  Apparently, the scenarios of Canada at War first appeared in the pages of MLR (and would be reprinted in 2012 by the Winnipeg ASL Club as Elite Canadians:  The Scenarios of Jim McLeod).

The MLR had a real chance to be a voice for Canadian ASLers, but never achieved that before the Internet spelled the death of most ASL newsletters. 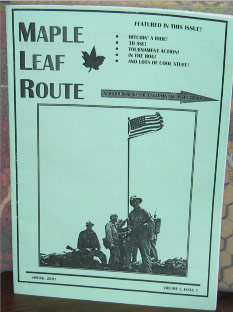