2020 will go down as one of those historically bad years, like 1453 or whatever year disco was invented. Among other things, 2020 saw a raging global pandemic and a right-wing attempt at a quasi-coup aimed at overturning legal elections in the oldest democracy on the planet.

For the ASL world, the pandemic was the source of most woes, as responsible ASLers had to forgo face-to-face play and real world ASL tournaments for most of the year (unfortunately, there were also irresponsible ASLers in 2020, too, and I have no doubt that some people spread the virus while playing ASL).  But the first months of 2020, before the virus became widespread outside of China, were the calm before the storm, and ASL proceeded more or less normally.  The Winter Offensive tournament in Bowie, Maryland, took place in January 2020 and fun was to be had there.

For some years now, Dan Best and his merry crew have been debuting themed scenario packs at the March Madness tournament.  This year was to be no different–until the tournament was cancelled.  Thus Best and the rest had to release the pack sans tournament.  But at least ASL players will be able to play and enjoy these scenarios at future March Madness (and other) ASL tournaments, once the pandemic is a happy memory and all we will have to worry about will be the Rampaging Mutant Land-Walking Electric Eels that will emerge from the abyssal depths following the pandemic.

The theme for the 2020 March Madness pack is “Full Rulebook ASL,” as in “the scenarios in this pack are [at least ostensibly] full of obscure or complicated rules.”  That may pale in popularity to a theme like “Panzers! Panzers! Panzers!” but there you have it.  Actually, the title may be more of a conceit than an actuality, as most of the scenarios don’t really have much in the way of obscure/complicated rules.

The pack contains 8 scenarios on cardstock, sans counter art.  March Madness packs tend to have somewhat large and ungainly scenarios, but this pack is a bit of an exception–it does have some such scenarios (three, to be exact) but this is balanced by four small scenarios (and one medium-sized one).  Three scenarios utilize or potentially utilize OBA, while two scenarios are Night scenarios.  No scenarios have air support.

A rundown of the scenarios and any “complexities” follows:

MM66 (Brazil’s Here). Italy 1944, Brazilians vs Germans. Complexities:  Possible Set DC, possible 60mm OBA.  Incidentally, if you think it is easy to design a Brazilian scenario in ASL, think again.  Even though Brazil sent an entire infantry division, which fought for close to a year in Italy, it was considered a poor quality unit that was largely used just to “hold the line” in quiet sectors while better units fought elsewhere.  As a result, the Brazilians rarely engaged in more than skirmishing or patrolling.  Your humble author even purchased the official divisional history of the Brazilian division, in order to find scenario material, but there simply is not much there to work with.  There is only one official ASL scenario involving the Brazilians, A67 (Monte Castello). There is also a third party scenario from Friendly Fire, FrF 67 (Collechio).

So, as one can see, this scenario pack doesn’t really strain one’s rulebook knowledge all that much.  There’s no air drops, air duels, amphibious landings, scaling, desert, caves, fascines, ammunition trailers, Goliaths, clearance, skis, bigfoots, or any other such stuff.  So people shouldn’t be intimidated by the conceit/title of the pack. 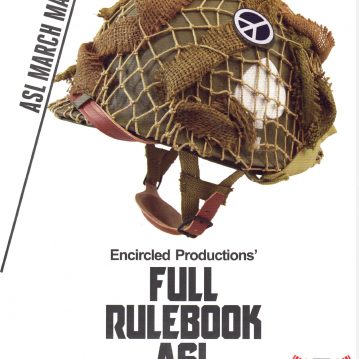