Kinetic Energy’s first scenario pack, March Madness ’97, was designed expressly for the ASL tournament of the same name that took place yearly in the 1990s in Kansas City, Kansas (the stomping grounds of KE principal Mike Reed at the time), as a “freebie” for attendees.  It was the first of a series of great gifts for tournament-goers, courtesy of Messrs. Neukom and Reed, and features a variety of tournament sized scenarios designed by Neukom, Reed, Paul Works, and John Knowles.  Two of the scenarios, KE5 (Beyond the Pakfronts) and KE12 (Sword Play), were reprints of Mark Neukom scenarios that originally appeared in the ASL newsletter ASLUG.  The 4-page supplement primarily consists of designers’ notes for the included scenarios.

The scenarios range widely over World War II, including actions set in France 1940, Lithuania 1941, Libya 1942, Russia 1943, Russia 1944, Sicily 1943, India 1944, Normandy 1944 (2 scenarios), the Philippines 1944, Belgium 1944, and Burma 1945.  One scenario is large, while the remainder of small or medium size, although many scenarios have a large number of AFVs.  As is typical for KE, several of the scenarios are quite rules-intensive. KE3 (Disengagement Under Fire) is a desert scenario. KE8 (Another Day, Another Field) is a DASL scenario.

The most rules-intensive scenario is, however, rather interesting:  KE2 (The Dreadnought of Rasyeinyia), a 4-part scenario in which the Soviet OB consists of a single massive KV-2 tank (and 9-2 armor leader!).  The German OBs consist of a variety of small infantry, artillery, and AFV packets, each of which is tasked with taking out the “dreadnought.”  The designers cheerfully admit that the scenario is heavily dependent on the dice–a critically bad roll or two and the Soviets are doomed–but the situation is interesting nonetheless and Kinetic Energy at least gets an “A” for imagination.

Several of the scenarios are reasonably well-balanced and fun to play.  These include KE1 (Lion’s Share), KE9 (Aces over Eights), and KE4 (Panzers to the Rescue).  ASLers should stay away from the very unbalanced KE10 (Angels at the Airfield) and KE12 (Sword Play), among other scenarios–the single greatest flaw of Kinetic Energy was its tendency towards unbalanced scenarios. KE10 was later reprinted (with revisions) in the March Madness ’99 scenario pack, as was KE8. 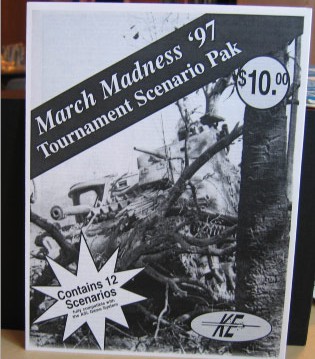