Before there was Armies of Oblivion, there was…nothing.  Well, nothing except this one scenario pack, Kinetic Energy’s March Madness ’98 Tournament Scenario Pack, which introduced rules, counters, and scenarios for certain selected late war Axis Minor troops and vehicles.  It was given to attendees at the 1998 March Madness ASL tournament in Kansas City, Kansas, but apparently never sold separately.  The tiny print run for this scenario pack, combined with the elusive (but always high quality) counters, has made this scenario pack the single most coveted collectible in the ASL world. Copies of the pack appear on E-bay seldom more often than once every couple of years or so, and when they do appear, tend to sell for $350-$450–a high price to pay for 9 scenarios and a small set of counters!

The counters themselves include both 1/2″ counters (primarily 5-3-7 squads and corresponding half squads, representing late war Romanian squads armed with large numbers of SMGs, and 4-3-6 squads and half-squads) and 5/8″ counters (representing Hungarian and Romanian vehicles and ordnance).  The scenarios all feature late-war Axis Minors in a variety of circumstances, including Germans vs. Romanians, Romanians vs. Hungarians, and German vs. Bulgarian, to name a few.  Because the pack is so rare, none of the scenarios have any particular reputation for balance or imbalance.

Now that Armies of Oblivion is out, which introduces to the ASL system the vast majority of counters originally represented here, it will be interesting to see if more of these scenarios are played as “black market” copies using AOO counters instead of the original counters. 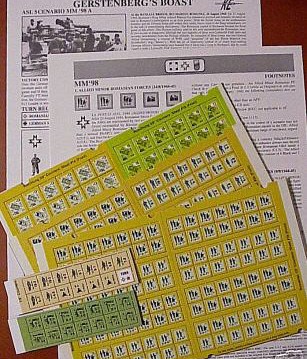