The last March Madness product, the March Madness ’99 Tournament Scenario Pack, broke yet another barrier:  this scenario pack featured 10 full-color scenarios (even including color photographs).  It was given to attendees at the March Madness ASL tournament in Kansas City, Kansas, in 1999.

None of the scenarios are original; all are reworked and reprinted versions of scenarios that previously appeared either in issues of Time on Target or the March Madness ’97 Scenario Pack.  These include one of the best-titled scenarios in the history of ASL, KE20 (The Steel-Eyed Boys), also pretty balanced.

KE14 (Another Day, Another Field) is a DASL scenario.

Strangely, the scenarios in this pack do not receive that much play, perhaps because their original versions were more widely available than their later, color versions.  All of the scenarios are tournament sized and easily playable.  Still, the usual caveat about Kinetic Energy and scenario balance problems should be applied, although since these are re-workings of older scenarios, the balances might possibly be closer than in the originals. 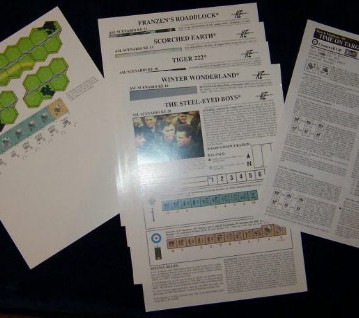