In 2003, the Southern California ASL Club released a small but innovative scenario pack, featuring 6 full-color scenarios, most of them tournament-sized.  One of the scenarios (MP1, The Wolves’ Last Tooth), features Italians and Greeks fighting it out in Albania, a second scenario is a Bulge action, and the remaining four are all set in the Hürtgen Forest in November 1944.  One of the scenarios (MP2, Curtain Kall) uses the Nphum Ga map from the ASL Annual ’97; the others all use geomorphic maps.

What makes the scenarios innovative is that all of them except MP1 feature partially choosable orders of battle.  For example, in MP3 (Holy Ground), the U.S. player must choose one of two different starting orders of battle.  He then chooses one of two different infantry reinforcement groups, and one of two different armor reinforcement groups.  The German player starts by choosing three set up groups from three different sets of two; he also chooses one of two Guns and three AFVs from among three pairs of two.  In MP5 (The Rats of Hamich), the German player has a specified starting force, but may choose three of five different fortification options, one of three different armor groups, and one of three different sets of guns.  The American player starts off with several leaders and must pick four infantry platoons from six choices, as well as one of four differently composed armor groups.

These choosable OBs make the scenarios very replayable, even though most of them take place on small map areas, because the force compositions can vary so much.  Players will find themselves encouraged to try different combinations of forces.  It is a very innovative idea.

Several of the scenarios (including MP1 and MP5) are quite interesting and fun to play.  Unfortunately, with the exception of MP2, all of the scenarios in the pack are unbalanced to varying degrees–some of them very unbalanced.  Perhaps this type of scenario needed particularly heavy playtesting, or perhaps the Melee Pack playtesters had a somewhat unusual playing style (it is interesting to note that in all of the unbalanced scenarios, it is the defending force that has the advantage).

In addition to the scenarios, the pack also included “Scenario Cheat Sheets” for all but one of the scenarios.  Essentially, these “cheat sheets” just has counter and Chapter H information for all AFVs in the scenarios.  Most players will probably not use these, so they seem like an added expense without much benefit.

The Melee Pack was definitely a worthy experiment, and SoCalASL deserves full credit for creating innovative and attractive scenarios.  However, it would be nice if SoCalASL could release revised versions of the unbalanced scenarios to fix them and allow players to enjoy them as they were intended. 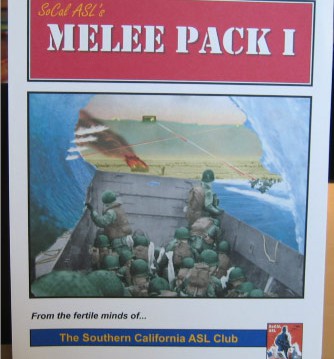