Molotov’s Cocktails is a set of two custom precision dice that are part of Battleschool’s line of dice designed for specific game functions (like its sniper dice, its ROF dice, its Dust Devil dice, and its Panzerknackern die).

This set consists of two 9/16″ (14mm) dice.  One die is white and features normal pips, but on its 1, 2, and 3-pip sides also features a red foil Molotov cocktail; this die is used for a MOL check dr.

The other die is amber.  It has white pips, but on the 1-pip side also has “P. Flame” for “Place Flame” and a rules reference on it.  The 6-pip side, meanwhile, also has a red foil “Break” on it.  This die is used for the colored dr of the IFT DR and indicates some of the consequences to the firer.

However, the red foil words are extremely hard to read against the amber background of the dice (clearly some color other than amber should have been chosen; this same problem shows up with one of the USMC dice, but at least with that die there was only a logo, not words and a rules reference).  This problem makes the set less functional (and it would be nice if a “second edition” were released).

Unlike ROF or Snipers, or even Panzerfausts, Molotov Cocktails do not appear very often in ASL and these dice would not be used very often.  Consequently, they should appeal only to those folks who want to get their mitts on every type of ASL-themed dice that they can. 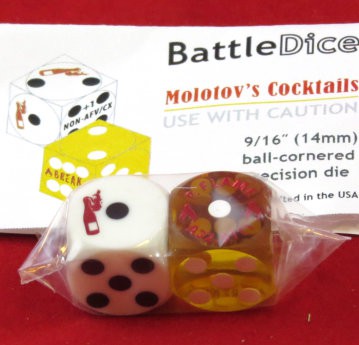