Monster Pack 2000:  as above, plus an additional monster scenario and a teaser scenario (apparently not playable).

The Monster Pack is unique among ASL offerings, as it concentrates on “monster” ASL scenarios; i.e., unusually large ASL scenarios meant to be played by teams.  The centerpiece is a massive scenario representing one of the Normandy invasion beaches that requires 16 players.  The pack had its genesis in the early 1991 when a group of Colorado ASLers led by William Stevens decided to simulate a massive East Front action 50 years after it occurred (using magnified boards and miniatures).  Everybody had fun and decided to make it an annual occasion (El Alamein in 1992, Kursk in 1993, D-Day in 1994 and Berlin in 1995).   The Monster Pack was based on these events, with a few odds and ends thrown in (see scenario list below).

These monster scenarios are probably more important as experiences than in winning or losing.  There is something just in the spectacle of seeing more than a dozen ASL players all playing the same scenario, just as it is more than impressive to see an entire Normandy invasion beach laid out on two long tables.

Unfortunately, the innovation of the scenario pack is marred somewhat by the poor physical quality.  It is poorly edited and punctuated, and random words are capitalized throughout.  Much of the text is a Courier typewriter font (though, strangely, some of the text is in another font).  In some of the scenarios, historical accuracy is sacrificed for “fun” (in the Kursk scenarios, for example, players may ignore rarity factors when purchasing their forces).

The physical quality of the later edition, Monster Pack 2000, is even worse.  Although it cost more than the original, the scenarios are no longer printed on cardstock but rather on photocopy paper (except that, strangely, one or two random sheets ARE in fact printed on cardstock).  Moreover, while the original pack had one scenario per card, the photocopies are printed on both sides, but more or less randomly, so that some Gold Beach! pages, for example, appear on the backs of other scenario pages.  This is frustrating because some of the pages are not identified as to what scenario they go with (apparently the Berlin scenario).  The original pack had no counter artwork, but the Monster Pack 2000 uses strange counter artwork apparently derived from German World War II military symbology.  Since none of it will be familiar to most players, it aids counter identification not at all and might as well not have been included (since it also doesn’t make them more attractive, either).  The enclosed “China Pack” teaser scenario does not appear to be playable, as it requires “China Pack overlays” which are not included.  Overall, the physical quality of Monster Pack 2000 is quite depressing.  No China Pack was ever published; the Monster Pack remains War-Oboe’s only effort.

Some of the scenarios in the Monster Pack might be a fun way for an ASL club or group to spend a weekend; for individual ASLers, this pack is recommended only for completists. 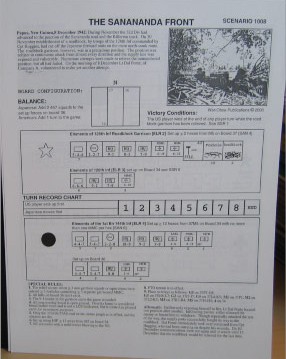