Apparently in anticipation of the re-printing of Code of Bushido and Gung Ho in the form of Rising Sun, in 2013, Battleschool began a new series of dice dubbed the “Pacific Series.”  The third of this series is a pair of Nationalist Chinese-themed dice.

This set consists of two 5/8″ (16mm) custom precision dice.  One is white and where the 1-pip would normally be is instead a silhouette of the Chinese sunburst.

The other die is dark blue and in place of the 1-pip on that die instead is somewhat hard-to-make out red foil dragon and the two Chinese characters for “I broke my MMG again.”

The dice are quite attractive and make a nice addition to the collection of any PTO fan. 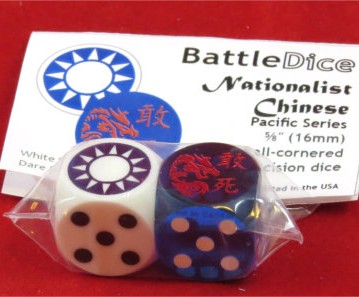