Contents:
10 scenarios, sheet of paper with overlay and 7 unmounted counters

OAF Pack 1 (there was never a second OAF Pack) is a collection of scenarios reprinted from On All Fronts, a long-running Squad Leader/Advanced Squad Leader newsletter from Arkansas. On All Fronts was quirky at best, with production values never really a concern for its publisher (early 80s computer print graphics was pretty much par for the course for its whole print run). While it lasted, it published scores of ASL scenarios, of wildly varying degrees of quality. This pack represented an attempt to salvage the “best of” the scenarios that appeared in the newsletter.

Its appearance is yet another striking example of the inconsistency that has always plagued Critical Hit. The scenario cards in the pack are a wild experiment, never to be repeated again by Critical Hit, using “TO&E Trees.” They have no advantage over conventional scenario card arrangements. The scenario cards did have one practical innovation, graphically indicating set-up areas, reinforcement areas, and overlays on the scenario card maps. This was useful, and Critical Hit continued their use for a while before inexplicably abandoning it.

One scenario, OAF7 (King’s Pawn to…Taejon?) is set during the Korean War.  OAF8 (Attack at Martinville Ridge) is a DASL scenario.

The scenarios in the pack are nothing really remarkable, though OAF4 (Firefight before Breakfast) is worth playing, and others may be. 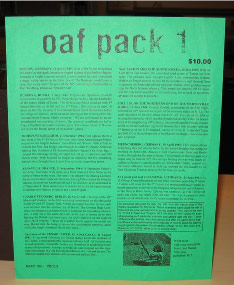