Objective Schmidt is one half of a “two-module presentation” of part of the Battle of the Huertgen Forest, the U.S. Army’s most significant defeat in the 1944-45 campaign in France and Germany.  During this battle, in November and December 1944, Omar Bradley hurled a number of infantry divisions at a fortified German line in the dense Hürtgenwald (just north of the area from which the Germans would later launch the Battle of the Bulge).  The terrain, the conditions and the Germans ground up all the U.S. formations, with little gain achieved.  It was a bloody battle of attrition.

Objective Schmidt (hereinafter OS) focuses on the American attempts to capture the town of Schmidt. Its companion, Huertgen Hell, released at the same time, focuses on the attempt to take the villages of Kommerscheidt and Vossenack. The provenance of both modules is not entirely clear.  The common rules shared by them credits the “original map prototype” to Larry Winslow, as well as “some of the scenario concepts.”  One perhaps can assume that the development of those scenarios, as well as the design of whatever other scenarios are involved, rested with Ray Tapio.  No playtesters are mentioned at all, which is never a good sign with a Critical Hit product.  Map art is credited to the mysteriously vague “JQ studio.”

It is the maps that are really the selling points of these modules, to the extent that they have one, as otherwise they have relatively few scenarios and no campaign games.  The OS map uses the new style of map CH debuted in 2014, based on overlapping 12″ x 18″ glossy light cardstock/heavy paper map panels.  They must be assembled to form the playing area.  OS comes with 8 such map panels, which makes for a very long map area (and that is without combining it with the Huertgen Hell map).  The image on the back of the product does NOT show the HH map but rather the combined HH/OS maps, though it does not say this anywhere.  However, HH is not needed to play any of the OS scenarios.

The maps will often require efforts to discern terrain.  This is not Critical Hit’s fault but the fault of the actual terrain involved, which combined heavily wooded areas with steep hills and valleys.  Thus players will regularly be checking to figure out what level their units are on.  The addition of quite a few slope hexes doesn’t help matters any.  In a large number of cases, slope symbols appear in hex clusters that are all woods terrain, which means that the sum effect of the slopes would only be to add a 1/2 MF cost to infantry units moving up slope.  Was it really worth putting slopes in those hexes for that single, paltry effect?

OS comes with three full countersheets, all done in “modern” CH fashion, which means that the graphic qualities are finally up to par.  The die-cutting was a little off-center on the two sheets of 1/2″ infantry and SW counters, but not bad enough that it intersected with any counter text.  One German vehicle has all of its counter factors mysteriously printed in white (the ghost halftrack).  The counters are virtually all essentially gratuitous, being duplicates of existing official ASL counters.  The rules do introduce the M29C Weasel, an American amphibious wide-tracked armored truck-thingie, designed for transport across snow and difficult terrain.  One such truck is used in one scenario–the same is true for HH, which naturally makes one wonder if they were just thrown into these two scenarios in order to justify their presence in the countersheet.

OS comes with 6 pages of rules, printed as loose-leaf sheets of paper with holes punched in them.  The rules are in color.  They are extremely simple, mostly consisting just of clarifications to help people recognize terrain.  A few special rules are included, such as hand-to-hand combat; they are mostly basic, but there are a couple of major exceptions.  Essentially these exceptions are complex special scenario rules originally developed by Kinetic Energy, then many years later adopted/borrowed/stolen (take your pick) by Critical Hit, which often gratuitously threw them into modules as “optional rules.”  The rules in question are Bayonet Charges and Marching Fire, which add even more complexity to ASL without providing any actual benefits.  For some reason, however, in OS they are not described as optional but instead appear with all of the other regular rules.  However, I recommend NOT playing with these rules (they are, in any case, not really applicable to this historical situation, anyway).

OS comes with only 8 scenarios and no campaign game.  However, the scenarios that appear in OS do seem to be better than those that appear in HH; the latter tend to be very small in size, not really worth the effort of setting all the maps up and playing.  OS has some more meaty offerings.  One scenario is small in size, three more are medium-sized and a full half of the scenarios are large scenarios.  Four scenarios utilize the whole historical map (in sharp contrast to HH, where only one does), giving players a chance to really experience what it is like to fight over this terrain.

OS13 (Every Man for Himself) features a major German counterattack with 38 squads and 11 AFVs against American forces of 30.5 squads and 6 guns.  OS15 (Dawn at Kommerscheidt) depicts another German counterattack, with 31 squads and 14 AFVs; the defending Americans have 29 squads, 4 guns, and 9 AFVs.  This is a nice meaty scenario as, though there is a pre-game bombardment, players don’t have to worry about OBA or Air Support, but can just bash at each other.  The included “monster” scenario, OS16 (Task Force Ripple) features yet another German attack (unusual for an American offensive)!  This scenario has a full 38 German squads, 8 guns, and 14 AFVs pitted against Americans with 29 squads, 6 guns, and 14 AFVs.  Both sides get tons of artillery, while the Americans get some late game Air Support in this 15 turn scenario.

CH does include a few paragraphs of rules for something they call “the Macro Scenario,” which is not actually a scenario at all, but more like unplaytested scenario suggestions that call for using HH2 and its OS13 (with the latter doubled in size) and adding some turns.  It is basically a “go homebrew it, dude” statement and even says that “players may make any needed tweaks/modifications within the Macro Scenario framework.”  How lazy and indifferent!

Operation Schmidt comes in at a very hefty price of $99.95, which is a steep price to charge for 8 scenarios, no campaign game, gratuitous counters, and a map.  That is a cost of $12+ per scenario.  Moreover, the only way to combine OS with its sister game Huertgen Hell is through a last-minute “do it yourself” homebrew directive.  However, OS is a better product than HH, because it has a better and bigger mix of scenarios, so if want to try one of these, this is the one to spend your money on, rather than Huertgen Hell.  People interested in the subject should probably wait for Bounding Fire Productions upcoming Huertgen Forest product (which may have “inspired” this effort in the first place). 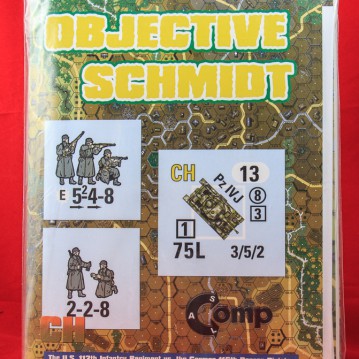