In 2015, North Carolina ASLer Derek Ritter released for sale a set of printed OBA access cards, which he titled quite literally “Offboard Artillery Access Cards.”  The 262-card set appears to have been printed in China, in limited quantities, which may make it a collector’s item, as Ritter has stated that there are no plans to reprint the cards.

What are Offboard Artillery Access Cards? We are so glad you asked.  Allow me to explain.  No, there is too much.  Let me sum up.  The ASL rules prescribe that players either use the red and black chits provided in the Beyond Valor countermix (on the backs of DM counters) or a deck of playing cards in order to determine OBA battery access.  Pick/draw a black chit/card and the player has access; the red chit/card means that access is denied (cue Wanh Wanh WONH sound).

Of course, that’s not enough for most ASLers.  Who wants boring chits or playing cards when one can have something snazzier, something cooler, something more, well, ASL-y?  Thus over the years, a variety of ASL enthusiasts have produced their own custom OBA cards of various types, sometimes for personal use, sometimes to share with others or to market an ASL tournament or other ASL entity. The most popular custom OBA cards in the ASL world have actually been the freely downloadable Custom OBA Deck Designs from none other than Desperation Morale (cue self-congratulations, mother beaming with pride, etc.), which debuted in 2003.  The DM play aids section also contains some nice OBA card designs from other ASLers as well.

Typically, the OBA cards that have been produced to date were not commercial products but were promotional items or freely given away. Thus Ritter’s Offboard Artillery Access Cards (OAAC) are a new departure and fall into the area of commercially-produced play aids and accessories (Ritter seems to be planning other future ventures into ASL accessories as well).

The cards, which are the size of standard playing cards, are professionally printed on a thin semi-gloss stock (Note: I have been informed that they are actually printed on PVC). The hook for the OAAC, and which differentiates these cards from all the previous OBA card designs, is that cards are differentiated by types of OBA.  So, instead of one set of battery access cards used for all OBA attempts, this set includes many subsets of cards, one for each type of OBA possible, such as 100mm Naval OBA, 80mm Battalion Mortar OBA, 120mm OBA, 100mm Rocket OBA, and so forth.

The front of each card has the type of OBA (such as 70mm OBA) and a graphic depiction of a gun of that caliber.  Each type of OBA seems to have a different front color scheme as well, which makes it easier to tell them apart.

In addition, the back of each card contains a variety of OBA-related information, most of which is specific to that type of OBA and designed to be theoretically helpful to the players.  These include:

All text, large and small, is rendered as beveled, which can make some of the smallest text more difficult to read. It can also make some of the larger text very unattractive; overall, the beveling was not a good idea.

There is some color variation on the front of the cards, though it appears to be slight and not consistent.  It may also possibly vary in intensity from one copy of the product to another. This is a potential issue because, if the red and black cards are distinguishable by color variations on the front of the cards, then they are much less useful (and must essentially be used in sleeves, such as those used to protect Magic: the Gathering cards).  It is not clear that there is actually a problem here, though, and in all likelihood the variations are so slight and so inconsistent that they won’t make any practical difference.

One thing that can make a practical difference is the number of cards available for each type of OBA.  Essentially, there are enough cards for each type only for one module for the nationality with the most generous allotment.  This means that if both sides in a scenario have a module of 100mm OBA or one side has two modules of 100mm OBA, players are kind of screwed.  Granted, these are not frequent occurrences, but do happen in OBA-heavy scenarios (such as in many Critical Hit historical modules designed by Larry Winslow) and in some campaign games.  Just something to be aware of.

One final note: though these cards come in a sturdy and compact cardboard box, there is no denying that they take up more space than a simple deck or half-deck of playing cards (after all, there are 262 of them).  So these cards are not that convenient for those ASLers for whom space (such as on a traveling ASL set) is at a premium, especially given that they will only occasionally be used. They are more suitable for use at home.

Obviously, this accessory is not necessary at all, but it does add some flavor and spice to an otherwise generic.  Of course, that’s spice that costs $40, which may be a very pricey spice for some.  But remember, money you spend on ASL is money you are not spending on hookers and crack, so there’s that.

Overall, the OAAC have a couple of warts/hiccups but are still decent accessory products for ASL.  Unlike some other commercial accessories offered to ASL players in recent years, these OBA cards can actually be used to good practical effect. 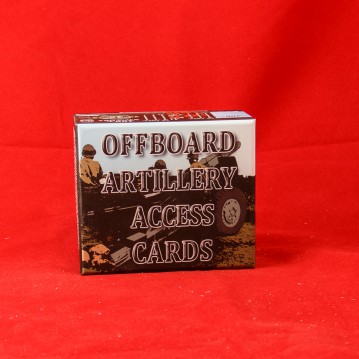