2nd Edition:  as above, but the map is unmounted.

Oktobermessed! is quite possibly the most unusual ASL product ever produced.  Introducing zombies to ASL, the module simulated the rising of the dead in the environs of the hotel where ASL Oktoberfest (ASLOK), the world’s largest ASL tournament, is held every year in Cleveland, Ohio.  In its scenarios, a mixed collection of ASL players, hotel staff, local police, and others must fend off the ravenous brain-eating zombie hordes.

Zombies are represented by Japanese counters (the step reduction nature of which works well with the living dead), while the still-living are depicted (rather optimistically) by U.S. Army counters.  There are rules for zombie movement, infection, Alpha zombies, and much else.  Scenarios have titles like “Brunch of the Dead” and “Hell is Full.”

The map is a surprisingly well done large-hex full-color map of the Quality Inn (it has since changed ownership) at Middleburg Heights (part of Cleveland, Ohio) and vicinity, where at the time ASLOK was hosted.  ASLers who have attended those tournaments held at that hotel will be able to pick out such features as the Dunkin’ Donuts, Damon’s Ribs, Denny’s, and other area establishments.  It was created with the help of satellite photographs, a use for which I am sure the U.S. government never predicted.

This may be an ASL product that more people buy just to own than to play, but regardless, it is amazingly inventive. 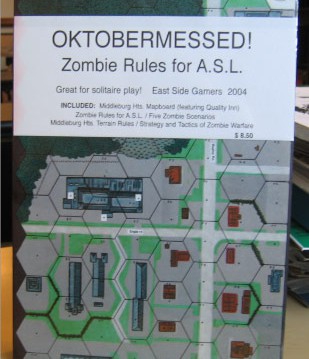