Omaha East is the monster-sized historical module portraying the eastern half of the D-Day landing at Omaha beach and the fighting directly inland.  Together with Omaha West, it simulates the entire landing at Omaha beach.  The combined Omaha East/Omaha West is the largest ASL product published to date.  Critical Hit claims that “according to the Guinness World Record folks,” it is the “largest board wargame ever published.”  Both Critical Hit and Guinness (if it was ever actually involved at all) are dead wrong–the game is not even in the top five largest board wargames–but as far as ASL products go, it’s a biggie (it even comes in a box, something Critical Hit has done only a few times in its existence).

Omaha East is also the most expensive ASL product released to date, currently selling for $299.95.  Even though Omaha East has a lot of contents, the module is overpriced.  In fact, it is not simply overpriced, it is bizarrely priced.  The first Omaha module was about a third of the Omaha East price.  And, as of this writing, the price for a combined Omaha West-Omaha East is $279.95.  By pricing Omaha East at $299.95, Critical Hit seems to be trying to drive consumers towards purchasing the two-game bundle, even if they already own Omaha West.   This is really nothing less than ultra-cynical price gouging.  To give some perspective here, for about the same amount of money, Decision Games’ War in the Pacific provides 7 full maps, a huge set of tactical maps for hundreds of islands, and 32 countersheets.  Critical Hit offers far less.  Consequently, no matter how intriguing this module may or may not be, it is virtually impossible to recommend it, so severe is the overpricing.  A more reasonable price point for Omaha East would be about $100.

Some of the comments made in the write-up for Omaha West are relevant here, so be sure to read that write-up as well as this one.

The three maps are generally well-rendered, though the palette is a bit dark.  the maps depict the beaches and the areas immediately inland.  There are many (too many) different elevation levels in this relatively flat terrain–the River Ruguet depression, for example, which represented about a 20 meter elevation difference, is represented on the map as seven different levels!  As a result, many hexes contain triple elevation levels, and there are some quadruple elevation hexes and at least one quintuple elevation hex.  Moreover, most of the levels are represented by shades of green that are so close together in hue that they are difficult to tell apart.  While the map occasionally contains circled numbers meant to indicate elevation level, these are too far and few between to compensate.  Most of the map represents ocean/beach or pasture land, with two little villages.

Omaha East comes with a ton of counters, but many of them are not needed for play, being simply duplicates of already existing counters.  Some of these could be useful in playing the massive landing scenario, but they wouldn’t be needed for any of the scenarios.  Some of the inclusions are just silly.  There is one whole countersheet of American SMC, for example, and another of German SMC.  These sheets do not appear to have been designed specifically for Omaha East but rather seem to be reprints of “vanity” counters that Critical Hit has offered for sale from time to time.  Thus, for example, there are 10-3, 10-2, 9-2, 9-1, 8-1, 8-0, 7-0, 6+1, and 1-4-9 German SMC counters all named “Fujitsa.”  This German Army even has a “Captain Silverstein.”  The American sheet includes a 9-1 leader named “Pitcavage,” apparently because many years ago Mark Pitcavage purchased a few vanity counters from Critical Hit to see what they looked like.  The names on the counters don’t really matter, of course, but what does matter is the SMC counter mix.  The German countersheet includes a total of 15 10-3 leaders!  The American countersheet beats that with 16 10-3 leaders.  These are simply not needed.  If Critical Hit had included a more intelligent countermix it probably could have shaved off a couple countersheets and reduced the price accordingly.

The countersheets come with two new U.S. squad types:  6-6-8 U.S. Army Ranger squads and 5-5-7 U.S. Army Engineer squads.  However, the 6-6-8 counters are not even used in Omaha East, rendering them superfluous.  The 5-5-7 Engineer squads would better have been represented by the existing American OB.

A legitimate concern about the rules for any would-be Omaha tactical game is whether or not the levels of complexity would go overboard.  The Omaha East rules, though, are actually reasonable, and players do not have to take a summer course in order to play it.  The twelve-page (unstapled, unholepunched) rulebook basically has 8.5 pages of actual rules, which is pretty manageable.  Some rules explain on-map fortifications, such as trenches, perimeter wire hexsides, barbed wire hexes, shingle hexes, and beach obstacles such as Belgian Gates, high stakes, Hemmbalken, hedgehogs, anti-tank ditches, Rommel’s asparagus, and minefields.  The rules for all of these are simple and straightforward.

Other rules explain some of the counters, such as Bangalore Torpedoes, TNT charges, new pillbox types, and weapons pits.  The pillbox rules are the most elaborate.  There are additional rules governing some of the watercraft that appear in the game. There is also a landing craft play aid, done in full color, which is very nice.

Omaha East has no campaign game, which will disappoint some.  It contains 16 scenarios.  Leaving aside #16 for a moment, the remaining 15 scenarios are pretty equally divided between small, medium, and large scenarios.  In this, Omaha East has a better mix than Omaha West, which had a preponderance of quite small scenarios.  Omaha East contains a better range, as well as a good selection of map areas.  Eight of the first 15 scenarios use OBA (typically American 135mm NOBA).  None use Air Support or Night Rules (it’s the longest day, not the longest night).  Five of the first 15 scenarios use the Seaborne Assault rules.  Seven of the 15 take place along the shore, while the other 8 include both shore and hinterland or just hinterland.  The Americans attack in almost all of the scenarios; in a number of scenarios the Germans are pretty outnumbered and will be fairly passive, firing MGs from fortified locations.  That’s just the nature of the battle being portrayed.

Omaha East also provides some information that can be used to create a mega-scenario, combining the two large scenarios of Omaha East and West to create the entire early landing with all the maps.  Obviously, these ultra-large scenarios are particularly suited for group play.

Omaha East is an interesting product and together with Omaha West does add to the ASL world.  However, Omaha East is so expensive that it simply is not worse the price.  You can get more for your ASL-devoted dollars elsewhere.

This third edition of Omaha East is substantially the same as the 2nd Edition in many respects.  The main difference is that instead of large historical paper maps, Critical Hit now uses a huge number (28) of 12″ x 18″ heavy paper/light cardstock glossy map panels to recreate the battlefield.  The advantage is that colors look fresh and bright on these map panels, as opposed to the traditionally drab look that has been attached to most past Critical Hit maps.  The minor disadvantage is that the glossy coating causes reflective glare.

This pales in comparison to the major disadvantage, which is that it is a royal pain in the Landing Craft: Ass to use these maps.  These map panels use extra-large hexes, which is why the module, already large to begin with, now requires such an ungodly number of map panels.  And each of these map panels, which slightly overlap with each other, must be properly positioned and maintained, either with some sort of adhesive or by putting them under the world’s largest sheet of plexiglass.  Practical experience suggests that it is not too cumbersome for maps of up to 4 panels in size, but anything beyond that becomes irritating.  Well, 28 map panels is way beyond 4 panels (to say nothing of combining Omaha East with the 27 map panels of Omaha West).

Some of the graphics appear to have been re-worked, in a positive way.

In practice, because so many of the scenarios are small in size, not all of these map panels will have to be used, so the problem is not quite insurmountable.  But to play the bigger, meaty scenarios means dealing a lot with a lot of panels.  The counter density for the majority of these scenarios is not all that high, so there is no real practical need for the extra-large hexes; these maps are people who like big-ass hexes for their own sake.

Omaha East Monster is currently being sold by Critical Hit for $129.95.  Add the counters and the price jumps to $200–and that still doesn’t include Omaha West.  This is an extremely expensive edition.  As of this writing, the “Omaha West Final Countdown Edition” is still available for only $99.95–and it comes with counters.

Unless you are just a huge fanatic about super-sized hexes, there just is no particular reason to purchase this edition of the game if you already have the previous edition or can find it for a more reasonable price.  The Monster Edition is extremely expensive and quite unwieldy.  The nicer color palette is not enough compensation.  Of course, the bizarrely high pricing of the original edition of Omaha East (over twice the cost of the Monster Edition) may mean that many people passed on this product the first time around. 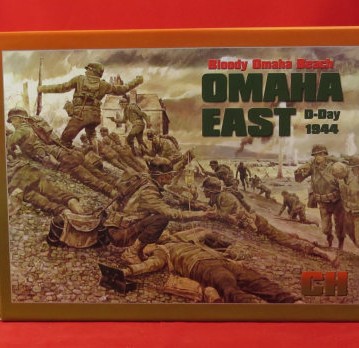