Operation Cobra (OC) is a difficult product to categorize.  Theoretically, it should appear in a publications section, as it does include a substantial magazine, but the magazine is not only stand-alone, as opposed to a periodical, but it does not even have a name.  As a result, it is being classified, perhaps not quite accurately, as a scenario pack.

As its name implies, OC is a collection of scenarios set around Operation Cobra, the American attempt to break out of the Normandy beachhead in late July 1944.  The timing of the release OC was perhaps not the best, as it appeared on the ASL scene in the midst of a flood of other official and unofficial ASL products that also dealt with the Normandy campaign–including one also released by Bounding Fire Productions simultaneously with OC, Beyond the Beachhead 2 (BtB2).  Because OC is unplayable without BtB2 (as every scenario refers to its rules, and all but one scenario use mapboards from BtB2), players wishing to play OC are forced to buy BtB2 as well.

The unnamed magazine in OC is long but contains only four articles.  These include a long article on “Fighting in Bocage” (opening with the question, “What is so appealing, or for that matter, unappealing” about bocage; for many ASLers the former has a much shorter answer than the latter),  which is essentially an extended guided tour through the rules complexities and conundrums of ASL bocage.

A second article discusses a new counter introduced in this product, representing the Panzerfaust predecessor, the Raketenwerfer 43.  This is followed by extensive designer’s notes for Operation Cobra and Beyond the Beachhead.  Last up is a lengthy historical article on Operation Cobra (which oddly calls it a “forgotten” operation).  The writing in the magazine is uninspired, but the magazine is in full color and profusely illustrated with examples.

OC also comes with a small countersheet of 5/8″ counters.  The majority of the counters represent Culin-equipped American tanks and American flamethrowing tanks.  Also included are counters for American fighter-bombers with rockets and for the German Raketenwerfer 43 (unfortunately, the latter are also included in “black SS” colors as well as standard German colors).  This is the first time that Bounding Fire released counters with one of their products; they are well done and greatly resemble recent HOB counters.

OC has no maps but does include an overlay, O-6a, which depicts a bocage-heavy crossroads.

The scenarios are printed on glossy cardstock in full color (unfortunately, SS units are depicted in black).  All have bocage.  Chas Smith-related products tend to have scenarios that veer towards the large; in this case, even though there were other designers than Smith involved in the project, the scenarios are overwhelmingly large.

One scenario in the pack that looks interesting is BFP-15 (Cobra’s Venom).  A 3-mapper, at first glance the scenario looks like an overwhelming American force will quickly crush a tiny set of German defenders.  However, a closer look at the scenario reveals that the German defenders also get 14 special concealment counters that actually represent random German MMC that are determined when American units come into contact with them.  The unit received could be a crew with an HMG or a squad of any German squad type.  Another innovative scenario is BFP-24 (Death Ride of Das Reich), which (like the old General Magazine scenario Timoshenko’s Attack) forces both sides to divide their forces among three unconnected boards.

Two of the few scenarios in OC that might be suitable for tournament play are BFP-22 (Speed over Caution), featuring an American combined arms assault on a small German position buttressed by two Panthers. It has proved to be balanced and fun and is the most-played scenario in the product. BFP-23 (Prelim to Death Night), which portrays an 15-squad SS attack, supported by a 150mm motorized artillery piece, on an American-defended village.  The Americans are elite and very well armed.

Overall, the production values are high in this product, but perhaps the scenario mix could have been a little less heavy.  It would be nice to see Bounding Fire at some point release a scenario pack featuring smaller and faster-playing scenarios, without so much “heavy metal.”  There’s obviously talent here; perhaps the subject range can be expanded.

This pack will appeal to people who like Normandy or bocage scenarios (if the latter class of people exist), and also to people who like armor intensive scenarios (vehicle totals for the scenarios:  0, 14, 10, 9, 15, 17, 0, 34, 8, 1, 35, 34, 28).  Because playing OC also involves purchasing BtB2, it requires a significant commitment of funds (some $94), and this high price might cause some people to pause before deciding to purchase.  It might have been better had Bounding Fire foregone the magazine so that the price could be reduced.

For people who already had BtB2, purchasing Operation Cobra is an easier decision, as it will give them additional scenarios that use the attractive maps that came with BtB2.  People whose ASL play tends towards shorter and faster scenarios that can be played in an afternoon or a tournament setting will also find relatively few offerings here.   People who might be a bit weary from all the Normandy stuff released in 2008-2009 may not rush to purchase right away, but might come back to it later.

Overall, it seems like a decent product and is not a bad complement to BtB2. 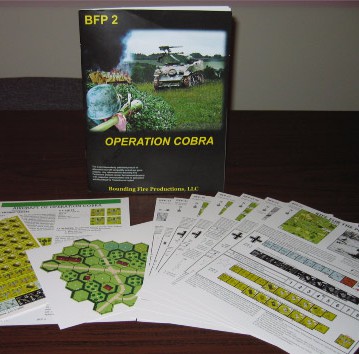