Operation Olive: Gothic Line 1944 (OO) is the first contribution to the ASL milieu by a citizen of the Republic of San Marino, thanks to its primary designer, Gian Carlo Ceccoli.  For those unfamiliar with it, the Republic of San Marino is a tiny country (the third smallest in Europe) with only 33,000 inhabitants, its few square miles completely surrounded by northern Italy.  In essence, Ceccoli chose to design an ASL historical module with connections to his own back yard:  the Battle for Rimini (a city close to San Marino), held by the Germans as part of the Gothic Line, which the British 8th Army attacked in September 1944.  The battle included fighting in San Marino itself as well as many nearby locations.

OO is what MMP in the early 2000s might have dubbed a “historical study,” and which in fact was inspired by MMP’s Operation Veritable.  The scenarios of OO do not all take place on some large historical map; rather, the 16 scenarios include a mix of geoboard-based actions as well as scenarios designed for three different historical maps (two small, one larger).  Together, the scenarios illustrate a wide range of actions that took place during the battle for Rimini between the British, Canadian and Indian attackers and the German defenders.  A number of divisions from both sides are featured, so this is not so much an in-depth look at one narrow historical action as it is a broader look at selected actions from the entire offensive.  The Allied forces are on the attack in 13 of the 16 scenarios; only 3 scenarios depict German counterattacks or ripostes.

Selecting Operation Olive as a subject allowed Ceccoli to conduct the sort of research (including terrain scouting) only possible with boots on the ground.  The one disadvantage is that, for whatever reason, the fighting in Italy has never been one of the more popular ASL subjects, so it will be interesting to see how much interest this module draws.

OO is quite easy to get into; it comes with only 2 pages of rules and the vast majority of those 2 pages are taken up with a historical summary, a map of the fighting, and a list of some of the sources consulted (very rare for a Critical Hit product!).  The credits reveal that Ceccoli designed all of the scenarios except one, which was designed by Enrico Granata and Gabriele Mazza, and that the product was playtested primarily by a variety of members of the San Marino Historical Games Association.  The list of playtesters is a welcome fact, as a number of other recent Critical Hit releases have not listed even a single playtester, which can definitely make one uneasy.

It should be noted that Ceccoli has supported his design with additional materials, including historical notes, errata, and two additional scenarios.  The lengthy historical notes are in Italian, as is one of the scenarios, but the errata and the second scenario are in English.  For the convenience of players, the errata and scenarios are also included.  One never knows how long such files may last, so they should be downloaded while available.

OO does not come with any counters–unusual for a Critical Hit product these days, but certainly not necessary, as the vast majority of Critical Hit counters tend to be redundant duplicates of already existing official counters.  OO also comes with an entire sheet of overlays, all of which are one-hex or two-hex vineyard overlays–so many that one could get drunk off of the overlay sheet alone.

The big appeal, of course, of any historical module is the map or maps.  OO comes with three maps.  Two are each a 12″ x 18″ small historical map printed on glossy heavy paper/light cardstock panels (the same thickness as a sheet of official overlays).  The third combines four of these to form a larger historical map.  The disadvantages of this style of map is that they are glossy, which causes reflective glare, and, with regards to the larger map, four separate overlapping maps have to be positioned and kept in place, which can be irritating.  On the bright side is the fact that the maps are, in fact, bright and colorful and look attractive.

The first small map is the Monte Pulito map.  Monte Pulito is a level two hill that overlooks a deep and rather steep (level -3) valley.  Two scenarios use this map; one has Gurkhas on the hill, defending a German attack, while the other reverses the situation and lets the Gurkhas attack the hill.  The second small map is the Hill 235 map, which–surprise, surprise, features another hill, this one a relatively flat level 1 hill.  However, the terrain around the hill is scarily open in most directions.  Only one scenario uses this map, a British attack against the hill (which luckily doesn’t have to cross the scariest parts of the map).

Four scenarios use the large historical map, the Monte Cieco map.  It should surprise no one that this map, too, features a hill, a large two-level hill in one corner of the map area.  The terrain on this map is quite interesting, featuring two large valleys, the hamlet of Monte Cieco itself, and, on the other two maps, one heck of a lot of open ground.  Three of the scenarios feature a German attack in the area and the subsequent fighting (including a disastrous action in which the British lost a huge number of vehicles).  A fourth scenario is a fictional scenario that essentially takes the disaster scenario and adds more infantry support.  Some players may be a little disappointed at the lack of substantial play on the key historical map in the product.

Leaving aside the fictional scenario, OO includes OO14 (Back and Forth), which uses part of the map to depict a British attack with 10 squads and 2 tanks against 5 German squads and an AT gun; OO13 (Counter-Attack at Montecieco [sic]), which also uses part of the map and features 10 German squads and two AFVs pitted against 12 British squads and an AT gun; and the “big” scenario, OO15 (The Charge of the Queen’s Bays), which is a turkey shoot scenario, using the whole map, that features 6 German squads, three AFVs, and 8 AT guns (3 of them 88s!) against 6 British squads and 25 AFVs (which mostly just want to get the hell off the map).  It may not be very fun to play the British in this scenario (the fictional version, with more infantry support, may be more fun to play, but won’t appeal to those ASLers who dislike fictional scenarios), so there really isn’t much in the way of a meaty scenario that can really give ASLers the chance to experience the map–and that is the sort of thing that ASLers who appreciate historical maps the most tend to like (other than campaign games, of which this product has none).  Thus overall it must be said that the Monte Cieco material is a little disappointing.

Looked at collectively, the scenarios have a pretty even mix of small, medium, and large-sized actions.  One scenario uses a “lite” version of the Night rules, while five scenarios utilize OBA.  Somewhat surprisingly, all five of these scenarios actually feature 150mm OBA (2 German, 3 British), which is relatively rare in ASL, primarily because it is so devastating.  Some of the scenarios that feature this OBA are actually pretty small, which means that the OBA may have the potential to really dominate the scenarios.

The majority of the scenarios have names that consist simply of the location where the fighting took place (San Fortunato, Gemmano, Croce, Coriano, etc.).  The historical background is often fairly short and non-specific as well, and none of the scenarios have even a single “color” SSRs to add historical chrome, which makes some of them seem a little bland (though some people may appreciate the paucity of SSRs overall).  Seven of the scenarios require players to place at least six (and often far more than six) vineyard overlays.  However, the mere number of scenarios, at 16, offers a fairly large amount of play value.

One of the two meatiest scenarios (both on geoboards) is also one of the most interesting, if it proves balanced:  OO6 (Coriano II).  This scenario pits 24 4-5-8 Canadian squads, plus 4 supporting Churchills, against 12 German squads with fortifications and mines, along with a pair of Panthers.  The scenario uses the relatively “fresh” (as of this writing) boards 2a and 5a; the Canadians must control the hill heights and exit infantry to win.  The other really meaty scenario, OO4 (Gemmano), also oddly enough features 24 4-5-8 (British) squads, as well as 3 Shermans.  They too face a mined and fortified position defended by 10 German squads (well armed and led), and two powerful AT guns.  Once more, the British have to control the hilltops.  The British also get some 150mm (with plentiful ammunition!).  That’s a lot of force to throw against the Germans, though they have a strong position.

For ASLers interested in the Italian campaign, this is certainly worth a look.  Others may have more to ponder, given the paucity and nature of the historical map scenarios and the fact that the product comes from a first-time designer and playtesters of possibly relatively low experience.  Perhaps the most significant consideration is the cost, as the product is currently priced at $69.95, which is  overcharging the customer.  It is hard to see how this price is justified (a price of $35-$40 or so would be more in line with reality). 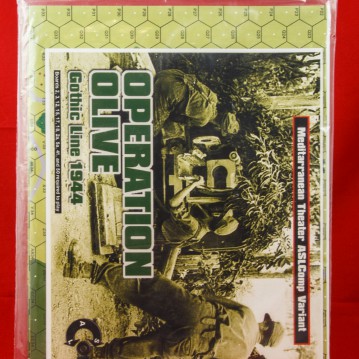