It soon became obvious that the original Operations magazine was now, at best, an afterthought; it never saw any further issues.  From 2008-2010, the yearly Operations Special Issue was the closest MMP had to a house magazine.

In 2011 MMP announced the demise of Operations, both in its normal and special variations, in favor of a new house magazine, planned to be released twice-yearly, called (confusingly) Special Ops.

The first “Special Issue” of Operations debuted at the World Boardgaming Championships convention in Lancaster, Pennsylvania, in August 2008.  Prior to its release, it was a somewhat controversial product because MMP announced that due to a peculiar agreement with the designer of the included (non-ASL) mini-game, MMP would print only an unspecified but limited print run described by MMP only as “more than an average Gamers print run.”  As normal Gamers print runs are typically several thousand games less than the average ASL print run, this immediately raised concern among many ASLers that copies of it would disappear quickly and some ASLers might be unable to obtain a copy, or be forced to pay a high price on E-bay or elsewhere.  MMP further announced that they would not take pre-orders for the Special Issue but would sell them in person at WBC and subsequently on their website, setting up the prospect of a “run” on copies of the game.  Because of speculation of such a “run,” MMP later announced that it would at first limit purchasers to one copy apiece.

The major ASL-related item in Special Issue #1 is the Singling mini-HASL, designed by Chas Argent, MMP’s newest ASL wunderkind, which follows in the footsteps of similar endeavors such as Nphum Ga, Kakazu Ridge, and Primosole Bridge.  However, despite its familiar-looking Chapter Z pages, Singling is strikingly unfamiliar in one area, because it features a map by Nicholas Eskubi which deliberately departs from the “traditional” official ASL map artwork conventions (which date from the 1970s) to use some of the more recent techniques and advances in computer graphics.

This is worth discussing in greater detail, as this is the first time that MMP has embarked upon such an “experiment.”  Their rationale was that, because their map components need not be compatible with those of other HASLs or other ASL products, a unique graphic look could be used for Singling.  This is certainly true enough and one hopes that this will occur with future HASLs as well (2014 Note: as of 2014, it hasn’t, so one must wonder if MMP deemed this experiment a failure).

The Singling map itself has both strengths and weaknesses.  It is well drawn throughout, with a careful attention to detail (Eskubi is a good artist).  Ironically, tiny details like the wheel ruts in the dirt roads actually are reminiscent of some of the unique details that appeared in the original hand-painted Squad Leader maps (such as sidewalks, etc.), which were dropped from later geomorphic maps.  Unfortunately, the map does not have enough such details; there are no front walks or paths or tiny bushes or backyard gardens or anything else.  Nor does the artwork necessarily take full advantage of its freedom from the constraints of “traditional” ASL artwork.  Since all of the buildings on the map are stone, for example, they could have been drawn more like the actual buildings of Singling, many of which had red roofs; this would have been a nice (and more colorful) detail.

Perhaps the biggest complaint that could be leveled at the map is its essentially monochromatic nature.  Though the palette was presumably chosen to help represent a European village in December, the all-brown nature of the map makes Singling seem more like a town on a wind-swept Tunisian mountain plateau than a French village.  With regard to the way individual terrain types are represented, the crest line hexes stand out as appearing artificial and unnatural–in contrast to the way other terrain types are rendered on the map.

Despite these flaws, the Singling map is still attractive and is a good experiment.  Presumably future such maps can enhance the strengths and reduce the weaknesses.  It should also be noted that the map was printed on glossy paper, rather than matte.  Some gamers do not like the glossy paper because of the glare it can create under certain lighting conditions.

The Singling campaign game and scenarios feature firefights between the U.S. 4th Armored Division and the German 11th Panzer Division around the village of Singling, France, on December 6, 1944.  Oddly, neither the magazine nor the ASL content explain any of this; the only information about the action appears in the 4 paragraphs of the two scenario cards.

Singling comes with only two stand-alone scenarios, SG1 (Abrams’ Charge) and SG2 (Fitzgerald’s Fire).  The former uses the entire mapsheet and is a fairly large, armor heavy scenario; the latter is a very small scenario (4 squads and 3 AFVs against 8.5 squads and 2 AFVs) that uses a small portion of the map.  It looks like it would be very quick playing and is an easy way to try out the map.

The Singling Campaign Game (A Pleasant Diversion) is a small one, with 3 CG dates (Morning/Midday/Afternoon), the first one of which is actually scenario SG1.  With a limited number of units and a shortened “refit” phase, the campaign game should play very quickly and could probably be easily completed in a weekend.

Overall, the Singling materials look like a nice addition to the ASL oeuvre; kudos should go to Chas Argent.

An additional, “bonus” scenario is included, VotG18 (In Sight of the Volga), adapting an old Beyond Valor scenario, ASL 5 (In Sight of the Volga), to Valor of the Guards.  Accompanying this is a “primer” on Valor of the Guards written by ASL veteran Jim Torkelson, which has useful tips in it, although it adopts a faux contemporary German “staff briefing” style rather than just being a straightforward article. 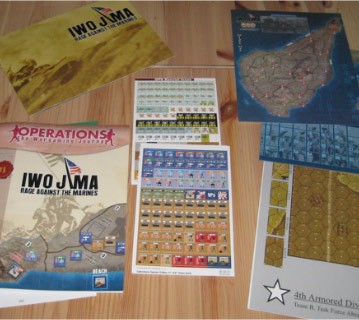