Ordeal Before Shuri (OBS) is a historical module depicting actions involving the 96th and 27th Infantry Divisions on Okinawa in April 1945, designed by David Dally. It was ostensibly the first of a three part series of modules depicting fighting on Okinawa, but it was never finished (a second module, Blood & Iron, was published in a somewhat different format some years later).

The most important component in OBS is its large map, centered on Kakazu Ridge (it is interesting to compare the map with the Kakazu Ridge map in ASL Journal 2). The terrain is definitely interesting, although the many different levels on the map make it rather complex. The hexgrid is printed in an odd, gray color which often makes it somewhat difficult to see. Overall, however, it is an attractive map. It also contains some interesting special terrain, including subterranean tombs, as well as some fairly complicated terrain, such as crag-brush-orchard hexes.

Many of the scenarios in OBS are complex and not well suited for beginners, using caves, NOBA, air support, night rules, bombardments, sangars, convoys, rice paddies, or other rules. This complexity may be one reason why the scenarios are little played. Of the 8 OBS scenarios, the one without any complex rules is OBS8 (Rubble Trouble). OBS7 (Suicidal Tendencies) and OBS2 (Hold the Ridge!) are also relatively easy to play.

Because of the actual and perceived complexity of this game and its scenarios (some rules perceived as complex, like Rice Paddies, actually don’t pose as much of a problem in practice), this module is rarely played. In a sense, this is a shame, because it actually provides a variety of types of tactical actions that can be found in few other places within the ASL world. For experienced ASL players who have an interest in PTO scenarios, this may well be one of those forgotten products worth a try. 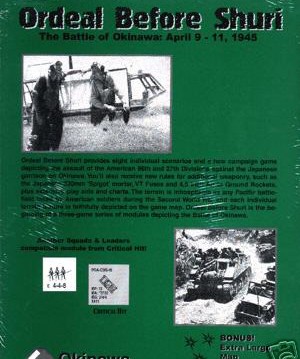