In 2006, Lone Canuck Publishing released a 6-scenario mini-pack featuring East-Front-themed scenarios.  Eight years later, in 2014, a sequel of sorts has appeared:  Ost Front 2:  The Liberation of Minsk (OF2).  OF2 is also a mini-pack, featuring a mere 6 scenarios, all of which feature the Soviet recapture of the Belorussian city of Minsk as part of Operation Bagration, the huge and successful 1944 Soviet summer offensive that virtually destroyed the German Army Group Center.

From the historical descriptions of the various scenarios it seems likely that the genesis of this book rests on a book about Schwere Panzer Abteilung 505, a Tiger tank battalion.  The pack is therefore rather Germanocentric, despite a title that suggests a Soviet emphasis.

As can be seen, most of them are smallish, though some feature a large number of AFVs. 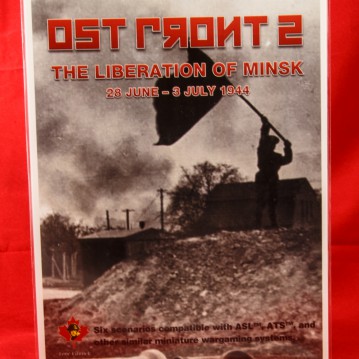