Home > Products > Out of the Attic Issue One

Contents:
48-page magazine, including 16 scenarios included as pages of the magazine

Out of the Attic Issue One (Oota1) was conceived of as a way to bring long out of print third-party scenarios to the newer ASL audience; its contents consisted of reprints of old articles and scenarios.  Its articles were generally good, with many of them focusing on night rules, including a good overview of night rules by J.R. VanMechelen.  This article, like several others, originally appeared in MMP’s own Backblast magazine (MMP is fond of cannibalizing from Backblast).  Other articles come from the Fire for Effect and In Contact newsletters.

Twelve of the 16 scenarios in Out of the Attic come from the long-defunct ASL newsletter In Contact.  One scenario, Sicilian Midnight, later appeared in an ASL Annual, and apparently was included simply because there was a series replay of that scenario in the magazine.  Two scenarios came from the under-appreciated Baraque de Fraiture/Parker’s Crossroads module, while two more came from–no surprise here–Backblast.

Unfortunately, none of the scenarios in Out of the Attic are true standouts–perhaps that was why they were so long out of print?  OA7 (Celles Melee) and OA 13 (Brief Breakfast) are probably the best of the bunch.

OA4 (Hell on Wheels) is a DASL scenario, as is OA12 (Sicilian Midnight) and OA1 (The Road to St. Lo).  OA3 (Waiting for Fredendall) is a desert scenario.

Out of the Attic was originally intended to be an occasional publication, but apparently it did not sell well, and MMP rarely expressed interest in a follow-up.  In 2009, however, after Chas Argent was hired by MMP to manage its ASL line, the concept was revisited and a second issue came out in 2010. 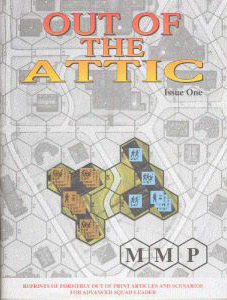