Home > Products > Out of the Attic Issue Two

Out of the Attic (OotA) was originally conceived of as a way to bring long out of print third-party scenarios to a newer ASL audience through publishing an occasional magazine with reprinted scenarios and articles.  Its first issue appeared in 2003, but apparently the reaction wasn’t what it was hoped to be–in any case, for whatever reason, MMP lost interest in the concept and the notion languished for years, with many ASLers consequently assuming that it was a one-and-done notion.  However, in 2009, Chas Argent came to MMP to handle its ASL line and he began to revisit a number of stalled or aborted ASL projects, including Out of the Attic.  As a result, in 2010, after a wait of seven years, the second issue of Out of the Attic debuted.  OotA2 is a 48-page magazine with 16 scenarios.

It’s nice to see a second issue of OotA, and newer ASLers in particular will appreciate its contents.  To the extent that OatA2 has a weakness, it is probably in the article content.  This is not to say that the article content itself is all bad.  Actually, most of it is good, especially Tate Rogers’ “What Do You Do When You Don’t Have a Can Opener?” and Bruce Bakken’s “Panzer Gegen Panzer.”  The only bad nut in the bag is a collection of three Jon Mishcon “Squad Leader Clinic” columns from The General; they highlight mostly just how bad Mishcon was in writing about ASL (especially if one considered that these columns were ostensibly his best).  With chestnuts of advice like “We never use AAMGs unless there is a Hero riding the tank” and “always use more than one SMC when possible [when engaging in CC vs. an AFV],” it doesn’t take long to determine that his columns are worthless.

However, all of the articles are drawn from official ASL sources, not obscure third party sources, and veteran ASLers are likely to already have all of them in their original form (nor are issues of The General or the ASL Annual really that hard to find for clever newbies).  So the articles are not exactly exciting.  Still, it is worth noting that there is an incredible paucity of good writing about ASL within the ASL community and most of the best ASL writers write for “official” ASL publications, so even if MMP had looked further afield for article content, it would have had difficulties filling the pages of the magazine with strong content.  What this strongly suggests is that Out of the Attic might work better as a scenario pack than a magazine; one hopes that MMP at least considers this in the future.

There’s a much nicer situation with the scenarios of OotA2, for newbies and veterans alike, and editor Chas Argent did some good work in scenario selection, particularly because of the decision to not simply look to old third party scenarios for republication possibilities, but also to look at some of the scenarios floating around in the ASL world that were created originally for play at tournaments but which did not see subsequent print publication.  Even the four third party scenarios which are reprinted in OotA2 have an association with a tournament.

For example, OA17 (Panzers Forward!) and OA18 (Parry and Strike) are reprints from a very limited edition scenario pack created by Canadian ASLer George Kelln.  This pack, the Panzer Aces pack, was only given away as a prize at tournaments and was never put out for sale.  As a result, most people who have copies of the scenarios have them only through photocopies obtained by pleading and arm-twisting someone who legitimately won a copy.  The two scenarios reprinted here are probably the most popular scenarios from the pack.  The other third party reprints are somewhat more available but still not easy to find.  OA24 (Buying Time) and OA25 (Side by Side) come from the ASLOK ‘XX’ 20th Anniversary Scenario Pack, a scenario pack put together by Rich Jenulis to commemorate the ASL community’s largest tournament.

Scenarios OA28 (Where Iron Crosses Grow), OA29 (The Amy B), OA30 (Raider Ridge), OA31 (With Friends Like These), and OA32 (The Riley Shuffle) were scenarios originally designed for the 1997 Southern Cross ASL tournament in eastern Tennessee.  Two more scenarios, OA26 (Vogt’s Ritterkreuz) and OA27 (Long Range Recon), were originally designed for the 2001 Gun Duel tournament.  What these scenarios all share, incidentally, is that they were first made available to a wider audience on the Desperation Morale Web site, though this fact is nowhere mentioned in the magazine.

Scenarios OA22 (After the Disaster) and OA23 (A Midnight Clear) were originally designed for mini-tournaments at ASLOK.  Scenarios OA19 (The Queen’s Prequel), OA20 (The Revenge of the Greys), and OA21 (Gunter Strikes Back) were originally created for an Australian tournament in 2006.

Most of the scenarios include some changes from their original design, as well as additional playtesting and development; the result is a mix of scenarios that will have something for almost every ASLer, newbie to veteran.  It’s hard not to appreciate this set of scenarios.

Because so many of them were designed for tournaments, the scenarios skew smallish in this product.  Indeed, many of the scenarios are not simply small but very small, smaller even that a typical tournament scenario.  Only 2 of the 16 scenarios are large and another 2 medium-sized.  The remaining 12 scenarios range from small to very small.  This is a mix that will be disappointing for people who appreciate meatier actions.

One scenario uses Night Rules, one scenario has Air Support, one scenario has OBA.  Most of the scenarios have few SSRs and it will be easy to get in and start playing them quickly.  Three of the scenarios (OA19, 20, 21) are loosely linked and take place on the same map configuration.  Because they are so small, players could easily play all three in a row in a single playing session, with the person who ends up best of three being the overall winner.  That way, two players could have a mini-tournament all on their own.  For some, that might be the only feasible way to play them, as they will fall below the “minimum size” barrier that some ASL players have in their minds.

One of the nicer scenarios in the magazine is George Kelln’s OA17 (Panzers Forward!), a small France 1940 combined arms action which, at its core, pits a half-dozen German Czech-made tanks against two Char B1-bis (each side also has one or two AT guns with which to liven things up a bit).

Kelln’s other scenario, OA18 (Parry and Strike), will appeal to people who like late war “heavy metal” armor action.  It features a German attack on a Soviet-controlled hill (on the dreaded board 47).  The Germans have 10 elite squads, plus 4 sleek new Panthers, fresh off the assembly line.  The Soviets have 7 first line squads, a 76mm artillery piece, and 3 IS-2s and 7 T-34 M43s arriving as reinforcements.   Heavy metal fans will also like Pete Shelling’s OA22 (After the Disaster), which has an “everything but the kitchen sink” OB.  Set almost at the same time as the Kelln scenario, it features a large German combined arms attack on a Soviet entrenched position.  The Germans have King Tigers and Panthers, as well as StuGs and halftracks, led by a 9-2 leader.  The Soviets have their own 9-2 leader, as well as two 122mm artillery pieces and 4 IS-2s (with an armored leader).

The Soviets get their own chance to attack in the magazine’s other meaty scenario, John Skillman’s OA28 (Where Iron Crosses Grow).   This scenario takes place on Board 4 (only) and the Soviet victory conditions are simple: control all buildings.  To accomplish this task, they have 5 6-2-8 squads (plus 3 more as reinforcements) and 15 4-4-7 squads, with plenty of machine-guns and a 10-2 leader.  For armor support, they have 6 T34-85s and 3 T34 M43s.  The defending Germans have to make do with “only” a 9-2 leader, but they have 5 other leaders and an armor leader to help out, as well as 13 squads (of 4 different types), a half dozen machine-guns, 2 Mk IVs, a 75mm AT gun, and their real strength:  a host of fortifications, including 12 Minefield factors, 4 Trenches, 5 foxholes, and 7 Wire counters.  However, they suffer from ammo shortage.

Overall, Out of the Attic 2 delivers a nice play value for a reasonable price (just slightly over a dollar per scenario; at that cost, the articles are gravy).  Though many of the scenarios are quite small, it still delivers a couple of hefty scenarios, too–and almost all of the scenarios are straightforward “get you right into the action” scenarios.  It is worth getting. 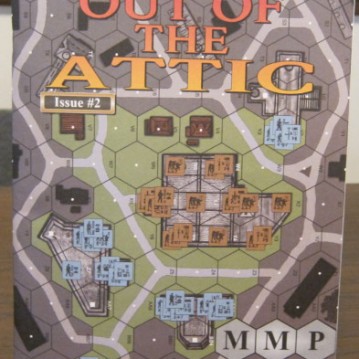