Four years after Lone Canuck’s first attempt at a historical module, it finally published its sophomore project, a similarly-sized product set near “the Black Sea town of Glebovka, Russia.”  If Glebovka doesn’t exactly trigger any of your memory cells, that’s because Ozerekya Breakout simulates a rather obscure action.    As a result of the successful Soviet offensives along the Volga from November 1942 through January 1943, the Germans had to withdraw from the Caucasus.  The 17th Army retreated into the Taman Peninsula (opposite the Kerch Peninsula, where Sebastopol is).  In February 1943, the Soviets launched an amphibious attack with several rifle brigades and a tank battalion against the Taman Peninsula to try to capture the important port city of Novorossiysk in the rear of the Germans and Romanians.  They landed at two places:  a small landing at Stanichka Bay close to Novorossiysk and a larger landing at Iuzhnaia Ozereyka, to the southwest of the city.  The smaller landing held out against repeated Axis counterattacks for 225 days until September 1943, when Novorossiysk was liberated, and its soldiers and sailors became famous heroes (and Leonid Brezhnev would later be turned into a fake hero).  The larger landing at Ozerekya (which this module portrays) failed, with some troops unable to land and the rest coming under heavy attack; they eventually had to break into small groups to escape the beachhead and make it to friendly lines, with little success.

If you didn’t know anything about this amphibious landing before purchasing Ozerekya Breakout (OB), you won’t know anything about it after purchasing the product, either.  Other than the short “historical” paragraphs on a few scenario cards, OB contains no historical information about the action at all.  While Desperation Morale does not care for historical booklets in ASL products, given how obscure this battle was, it would have made sense to provide a one-page summary of the historical action in the rulebook.  Moreover, OB will probably frustrate player attempts to find out more on their own by choosing what may perhaps be the least common transliteration of the place name, with the result that Google searches reveal only references to this module, as opposed to the actual battle (players can try Ozereika, Oereevkya, Ozereevka, Ozereyka, and Ozereyki, among others, for a bit more info).

As a subject for a HASL, it’s a bit odd that the designer chose the abortive Ozerekya landing for a subject rather than the more successful (and epic) landing at Stanichka Bay.  It is not clear what “breakout” the title refers to.  However, a HASL featuring mostly Soviets and Romanians is rather exotically attractive.

The most impressive component of OB is certainly the map, a gloriously green map depicting a vineyard-festooned valley nestled between two wooded hills, with the town of Glebovka (seemingly shrunk in size from what its actual size must have been) at one end of the valley.  The map, like that of Purple Heart Draw, was created using Hexdraw and is a very impressive-looking map.  It’s the sort of map that you just want to play on.

Sadly, there aren’t that many opportunities with this product to use the map.  OB comes with only four scenarios and ASLers may find them somewhat disappointing.  OzB1 (Vines of Red Marines), uses a tiny map area only 13 hexes by 11 hexes (i.e., smaller than half a geomorphic mapboard).  Five turns long, it pits 10 Romanian squads against 4 1/2 Soviet squads and a captured mortar.  Few ASLers are going to be excited about playing with fewer than 5 squads.  OzB2 (From America, Tanks) is no better.  This 4 1/2 turn scenario features 3 Soviet squads and 5 Stuart tanks attacking 4 Romanian squads and two AT guns (the Soviet forces are identified as coming from the 563rd Tank Brigade, but this seems to have actually been the 563rd Independent Tank Battalion).   The playing area is unclear because the map configuration description conflicts with the map configuration depiction.

OzB3 (By Fire and Flame) is still small, but at least it is not tiny.  It has a playing area that measures 9 hexes by 15 hexes and features a peculiar Romanian OB of 9 5-3-7 squads with 6 DCs and 3 FTs (!), accompanied by two Marder IIs, attacking 7 1/2 Soviet squads.    OzB4 is the one largish scenario.  It takes place on the northern third of the map, it is 7 turns long, and it pits 20 German and Romanian squads, with three tanks and some OBA, against 10 Soviet squads, two guns, and some fortifications.  It is the only option for somewhat meaty play without getting into the HASL.

Thus with  few scenarios, OB basically lives or dies on its one campaign game.  The “OzB Tactical Mission,” or campaign game, is an 8-date campaign game, with each date representing half a day (i.e., an AM date and PM date for each day from February 4-7).   The Axis side has the more interesting purchase options.  The Soviets win by accumulating 20 or more VP by the end of the campaign game.  They get 1 VP for each objective hex they control at the end of the last scenario, 1 VP for each 10 CVP inflicted (total), but lose 1 VP for each 20 CVP suffered.  Thus they essentially have to grab territory and hold as much as possible against counterattacks, inflicting more damage than they suffer.

What’s the bottom line for Ozerekya Breakout, then?  The campaign game looks attractive, at first glance, with a very reasonable 8 dates and the unusual aspect of it being primarily Romanian vs. Soviets.  Plus, it takes place on a very well-done map.  However, the scenarios are neither plentiful nor great, so ASLers who do not get much opportunities to play HASLs will find less to enjoy here.  It would be nice if, in the future, Lone Canuck provided a little bit more love to the ASLers who like to play scenarios on historical maps, too.  Ozerekya Breakout is essentially a HASL campaign game and people who really like HASLs will want to take a look at this one. 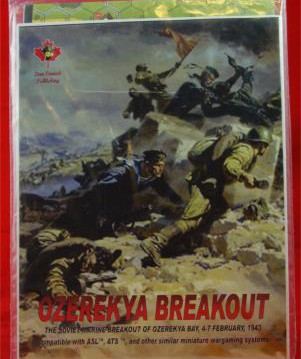