An interesting little offering from Battleschool that debuted in the summer of 2012 is this “panzerknackern” die, basically meant to be used when a German player is rolling for a Panzerfaust or ATMM for a squad.  The 1-face of the white die includes a pip, but also an image of an ATMM and an image of a Panzerfaust, indicating that a chance for either is successful.  The 2- and 3-faces of the die are similar.  The 4-face has a 4-pip and a Panzerfaust, along with a 45 -1 indicator, suggesting that this attempt would be successful for a Panzerfaust in 1945 because of the -1 drm for that year.  What would be the 5-face is instead a quickie drm list:  -1 for non-AFV target, HS/Crew, CX/PFk.  The 6-face also has no number but instead a nasty Pin/Break face (with red foil).

The die is interesting, although one had better get the agreement of one’s opponent before trying to use it, as some people will not like having to parse a new type of result.  Also, it should be noted that this die is 5/8″ (16mm) in size, which can get stuck in narrower/smaller dice towers.

In 2014, Battleschool released a white on black version of this die (also with red foil).  It looks a bit nicer than the original. 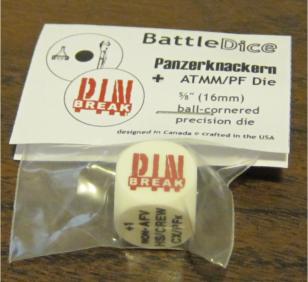