This small module is somewhat misnamed.  Like Paratrooper, it is more of a “quasi-core”‘ module than a true core module. It does not “introduce” partisans to ASL (whose rules and counters appeared in the ASL Rulebook and Beyond Valor).  While all of its 8 scenarios involve partisans, nothing else in the module is partisan-related.  There are no new rules or counters for partisans; in fact, the new counters represent the squads and support weapons for Axis Minor countries.

It is unfortunate that partisan forces are so poorly represented in ASL, because some of the most fascinating World War II actions involved irregular and guerrilla forces.  But partisan forces do not even get their own counter color (or, as is actually needed, two sets of partisan counters, one for Communist and one for non-Communist partisans).

Partisan!  is not one of the better ASL products.  Its scenarios are not that great and it doesn’t provide much in the way of components.  The release of Armies of Oblivion in 2006 made Partisan! obsolete, as it replicates the Axis Minor forces that appear in the early module.  Partisan! will not be reprinted; its maps will presumably be folded into the reprint of some future ASL module. 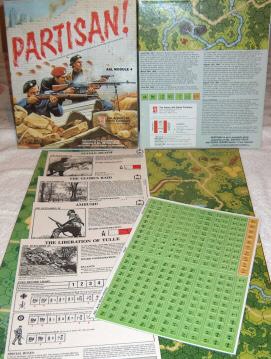