The so-called “Partizan Pack” (sic) is part of Battleschool’s “Nationals” line of 1/2″ (12.5mm) custom nationality-based precision dice.  The “Nationals” dice are white with a symbol or emblem where the 1-pip would normally be.  This small pack includes only two dice, one for Tito’s Yugoslav partisans and one for the Home Army (Armia Krajowa), which was the major Polish partisan organization.

The Polish die features the “kotwica” or anchor symbol of the AK.  It is actually the acronym PW, for “Pomścimy Wawer.”  This is the Polish phrase for “Wawer will be avanged,” Wawer having been the site of a massacre in 1939.  It later became redefined to stand for “Polska walcząca” (Fighting Poland).  It is by far the most widely recognized symbol associated with the AK.

The other die, for Tito’s partisans, features a red star with the letter “P” in it.  A red star is an appropriate symbol for Tito’s partisans, who wore it on their uniforms, but it is not clear why a P appears on it.  The partisans’ flag, which also could have been used, featured (top to bottom) blue, white, and red stripes, with a red star in the middle of the white stripe.  It would be nice to see this one re-done.

In any case, given the paucity of scenarios that feature either of these combatants (a shame, in both cases), these dice will not be used very often and are primarily for completists of the series. 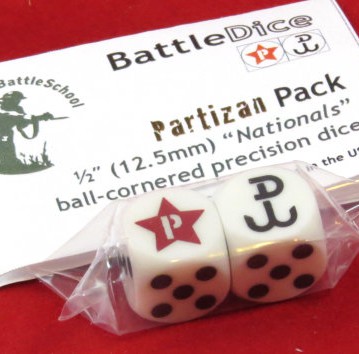