PB depicts the attempt by a British glider unit to seize a bridge over the Caen Canal on D-Day, the inevitable German counterattack, and the Paras’ eventual relief.  The module is a one-mapper, small in scope, and the one map isn’t the best historical map done for an HASL.  It has small hexes, too.  PBCG I (Coupe De Main) has 8 campaign dates, three of which are night.  It features a glider landing.  It is a balanced campaign game.  PBCG II (Hold Until Relieved) is only five dates, none of which are night, which means that the glider landing is skipped.

The game has relatively few special rules and is easy to learn (except for all that glider/night stuff).

The game’s reputation is mixed.  While it has its supporters (many of whom like playing elite British paratroopers or glidermen), detractors tend to dislike the map and the play of some of the scenarios. 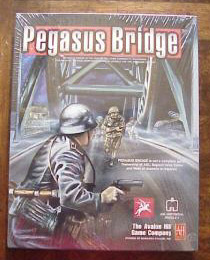