Peleliu: White Beach One (PWBO) is an ASL historical module designed by Larry Winslow that depicts part of the landing of the 1st Marine Division on the island of Peleliu in September 1944, a hard-fought struggle that turned out, strategically, to be largely unnecessary.  As such, it adds to the long list of USMC operations portrayed on historical maps by ASL publishers official and unofficial (while the much larger U.S. Army in the Pacific continues to get short shrift, to say nothing of other combatants).  For aficionados of amphibious landings, it does provide the ability to conduct a seaborne assault.   With a smallish map and only 8 scenarios, the module is priced somewhat expensively at $69.95.

The map is essentially square.  In the northwest corner of the map, there is a tiny sliver of beach (7 hexes worth); the rest of the map depicts inland terrain, dominated by jungle, palm trees, a hill in the center of the map, larger hills on the east edge, and a shellhole-pocked runway in the south.  Because of the proliferation of palm trees and shellholes, open ground hexes are a relatively rare occurrence on the map.  Specific places are often labeled, such as the aircraft hangars, the “Bomb-Proof Power Plant,” Air Raid Shelter #4, and so forth, which provide a nice sense of verisimilitude to the map.  The artwork is serviceable, though the jungle hexes are irritating, because the repeated cloning and stamping of identical jungle graphics from hex to hex is too blatant and obvious.

One new terrain type is introduced which appears frequently on the map:  coral outcroppings, which represent “sharp-edged terrain created by ancient coral beds.”  They are treated, more or less, as a combination of crags and woods.   Jungle terrain rules are slightly modified to represent “Casuarina Forest,” a lighter type of jungle.  Other terrain rules apply for specific map features, such as an anti-tank ditch near the beach, the Japanese headquarters, the Water Cistern Building, Fuel Bunkers, and so forth.  PWBO also adds a new entrenchment, the so-called Fuel Drum Emplacement, which represents makeshift fortifications using 55-gallon fuel drums filled with sand and rock.

In addition to explaining the terrain rules, the PWBO rules also include sections to depict the Japanese defenders.  Some of these rules are significant, including the provisions that Japanese Elite/1st Line infantry have a -4 DRM to HOB (!) and may not conduct Banzai charges, and that Japanese units are Fanatic while in caves, pillboxes, and the Japanese Headquarters.  The Japanese have a special Booby Trap capability that can actually cause Japanese squads (possibly with DCs) to appear on the map; this is a very interesting rule.  The Sniper rules are also modified to represent Japanese troops popping out of hidden “spider holes.”  On any Japanese Sniper Attack dr of 3, a spider hole attack might occur; these basically cause half squads to appear much as the Booby Traps cause squads to appear.  These rules can add a bit of excitement to a situation in which the Japanese will often be playing a very passive role.  PWBO rules also make it easier for the Japanese to target USMC artillery observers, and provide the Japanese with a monster but inaccurate offboard 200mm mortar.

The PWBO rules for the Marines provide special abilities to counters representing USMC officers Chesty Puller and Ray Davis, worshipped as demi-gods by USMC fans.  They also provide 4-4-7/3-3-6 counters to represent the “Seabees” (construction battalion troops), as well as 4-5-8 counters for “walking wounded” Marines.  However, none of the scenarios in PWBO actually utilize the Seabee counters; a note suggests that “later scenarios to be published in Critical Hit Magazine will use these counters,” which is pretty darn optimistic, considering that, as of this writing, it has been more than 4 years since an issue of that magazine has come out.   Important rules also appear delineating the effects of water shortage and extreme water shortage on USMC troops.  A new SW also appears, the “T20 shoulder-fired light mortar.”  However, as the weapon as represented in the module is as crappy as it appears to have been in reality, players with them may never even bother to use them.

Many of the USMC rules add little more than gratuitous chrome, sometimes at the expense of time and complexity.  These include “Marine Runners,” “Grenade Only Attacks,” “USMC DC Heroes,” and “Marine War Dogs.”

It should be noted that the rules themselves are essentially only 6 pages long; the rest of the rulebook mostly consists of a combination of designer’s and historical notes that explain some of the design decisions in the game.  These actually include historical references and are a welcome addition.

PWBO comes with a lot of counters, but most of these are duplicate counters of “official” counters and are not needed to play the module.  As there are not enough of these duplicate counters to actually play all the scenarios in the product with them, it is unclear why they appear at all.  It increases the price of the product for no gain.  Perhaps the reasoning behind it is the somewhat cynical view that ASLers may be more likely to buy a product if they notice it has a lot of counters in it.  The only actual additions to the system include counters for the T20 mortars, the Fuel Drum Entrenchments,  the USMC DC heroes, and a few individual counters.  Players should note that the die-cutting on the 1/2″ counters is extremely deep, with the result that counters fall from their counter tree at a slight touch.  They should be careful to insure against the inadvertent loss of counters in this fashion.

Because this is a late war Central Pacific-themed module featuring the USMC, the 8 scenarios tend to feature caves and 7-6-8 USMC squads.  Most of the scenarios use only a fraction of the mapboard.  Almost all of them are about the same size as a half-geo-board scenario, or slightly smaller.  The smallest are PWBO#6 (Valley of the Dead), which uses a map area that is only 9 hexes by 10 hexes in size, and PWBO#7 (Captain Harada’s Counter-Attack), which is 6 hexes by 9 hexes in size.  That’s pretty darn tiny.  Only one scenario, PWBO#8 (White Beach Blood Red), uses a significant portion of the map, and this is the one scenario that uses the entire map.

The USMC are on the attack in 5 scenarios, but the Japanese get their licks in with the remaining 3.  Because the Japanese SAN in most scenarios is 6 or 7, they will be getting some blows in regardless, especially considering the extra Sniper Activation possibilities.  American leadership is good–probably too good in most scenarios.  In PWBO#1 (Spitfire Three), for example, 14 USMC squads are accompanied by 7 leaders and a hero.  And of those 7 leaders, 5 of them have a -1 or better leadership DRM.  In PBWO#2 (“…Get Off the Air!”), 15 USMC squads have 7 leaders and a hero.  Of these 7 leaders, all seven of them have at least a -1 DRM.  In PBWO#4 (“Able Marines Fill the Gap”), 23 USMC squads bring along 12 leaders (plus an armor leader), 8 of which are -1 or better (including 1 10-2 and 2 9-2 leaders).  Having a leader to squad ratio of better than 1 to 2, all of which are good leaders, is pretty ridiculous.  Moreover, the worst USMC leader in the entire module is an 8-0; apparently the USMC only sent its good leaders to Peleliu.  In contrast, the Japanese have a total of 12 8+1 leaders (the Japanese equivalent of 6+1 leaders) in the scenarios in the module.  Moreover, five of the 8 scenarios give the USMC a hero to start with; none of them give the Japanese a hero.

The small number of scenarios in the module means there is only limited room for variation.  Most of the scenarios feature a host of 7-6-8 USMC squads, heavily armed and accompanied by tank and air support, engaging a mostly hidden force of low fire-power Japanese, of varying quality, fortified on a small and clustered battleground that will see lots of OBA.  If this is the type of scenario that appeals to you, then Peleliu: White Beach One will be right up your alley.

The differences between Corner of Hell and the first edition of Peleliu are cosmetic rather than substantial.  The most noticeable difference is the new style of map used with Corner of Hell.  Corner of Hell has a new map.  Or set of maps.  Unlike the original, which contained a single historical map, Corner of Hell uses 4 smaller maps to portray the same terrain.  This new map style, which debuted in a number of Critical Hit reprints in 2013, discards the old folded matte heavy paper maps in favor of smaller (12″ x 18″) unfolded glossy light cardstock maps.   This new map style is already becoming controversial.  Although it probably has a cost advantage for Critical Hit, the sole advantage to the player is that maps on this paper seem a bit brighter (which is a good thing).  There are several items on the down side, however.  First, the maps are unfolded, which means that this product comes in a huge shrinkwrap instead of a resealable ziplock baggie, so players will have to find some other way to store the product.  Also, unless they fold the maps themselves, they will find the product large and awkward to store.  They also have to arrange four different maps (which have both overlaying and nonoverlaying elements) instead of unfolding a single map.  The glossy nature of the maps causes glare when lights are shined on them.

But worst of all is that these maps are not cut.  Rather, a thin white border surrounds each and every map in this product, which means that the consumer must use scissors, a razor, or a paper cutter to cut off all of the white strips (16 in all) so that the maps can actually be used, just as if they were big overlays.  In other words, this is not so much a wargame as a wargame kit in which players must finish assembling the item themselves.  To save a few pennies on cutting, Critical Hit made things much more difficult on their own customers.  It is rather ridiculous.

The artwork is essentially the same as in the original module, with only minor differences, such as replacing the original jungle pattern with a new pattern (but within the same outlines) and replacing palm tree symbols with new palm symbols.  But in most instances, the same artwork was used.  The rules and scenarios are essentially the same, too (one of the scenarios is labeled “version 1.1,” suggesting some piece of errata was fixed.  The counters are different only in that there are fewer of them, but they have the same types as in the original.

There is no real reason why someone who owned the original version needs to purchase this version.  For those who have neither version and are considering a purchase, the original is a better version to get because no work is required to cut out the maps. 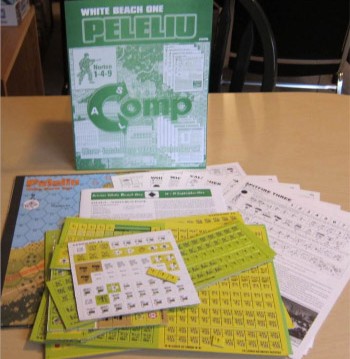