Point-Blank was a short-lived newsletter published by the Silicon Valley ASL Club.  Edited by Jon Halfin, it billed itself as “an independent free journal of ASL thoughts and ideas.”  Content primarily consisted of historical articles, non-original content cut and pasted from the ASL Mailing list, and the odd article on ASL (usually Red Barricades).  Some issues included unplaytested scenarios.  Overall, the content was not very good, with even a lack of interesting AARs and tournament reports.

The issues were originally made available as freely downloadable PDF files and may possibly still be available by contacting the Silicon Valley ASL Club.

In September 2010, editor/publisher Jon Halfin began publishing issues of Point-Blank again, in much the same style as before.  These issues, and presumably future ones, may be downloaded in the download section of the Gamesquad forum.

The March/April 2011 issue includes with it an “Otto Carius” SASL campaign.

In August 2012, Point-Blank published its first scenario, the first of a series of themed scenarios that will apparently eventually form a “pack,” dubbed the Nederlander Pack because all of the scenarios feature a Waffen SS unit (yes, yet another ASL product featuring the Waffen SS) from the Netherlands.

The scenario, SS-ND1 (Tooth and Nail) is a medium-sized scenario set in 1942 in northern Russia, featuring a Soviet attack on Waffen SS forces.  Only time will tell if the scenario is any good, but the scenario card itself is really very bad and basically needs to be completely redesigned.  For some reason, the card itself is “miniaturized” on the page, leaving not enough room even for the SSRs (which appear on the next page of the newsletter).  The scenario text is awkwardly written and contains mysterious phrases such as “Enter BU only T2a anywhere.”  Apparently, “T2a” means the first half of Turn 2.  The OBs are printed using some form of VASL graphics in which the AFV names do not even appear, so players will have to locate them by comparing counter values.     The fonts seem to be some odd low-resolution fonts.  The scenario is also full of typos (which is a bit odd, considering that six different people are listed as proofreaders for this scenario).

Overall, the scenario needs a LOT more tender loving care and one hopes that future scenarios will be given such care. 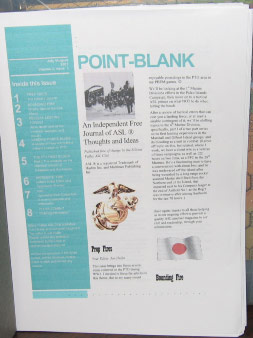