This one-shot magazine provides supplementary material for Critical Hit’s historical module Pointe Du Hoc, featuring the Rangers on D-Day.  Crudely produced, it has little of value in terms of gameplay.  Most of the articles are historical in nature; only one article really adds value to Pointe Du Hoc–an analysis of its scenarios.

There is no real reason why anyone would wish to purchase this Guide unless they are obsessed with Pointe Du Hoc.

2nd Edition comments:  In 2008, in anticipation of the future release of its large Omaha Beach historical module (First Wave at Omaha), Critical Hit reprinted a limited 2nd Edition of Pointe du Hoc and a 2nd Edition of the Pointe du Hoc Gamers Guide.  Among the new articles is an article analyzing the controversial BAR gunner counter of the 1st Edition PdH (it disappears from the 2nd Edition), an article on the naval assets in PdH 2nd Edition, an article on the ladders of PdH and another on the casemates of PdH.  The 2nd Edition also comes with a separate scenario card with 2 new scenarios for PdH, PdH7 (Beyond the D514) and PdH8 (No BARs to Be Had).   This 2nd Edition is more professionally printed and has more useful content than the original edition did and as a result might be a justifiable purchase, unlike the original. 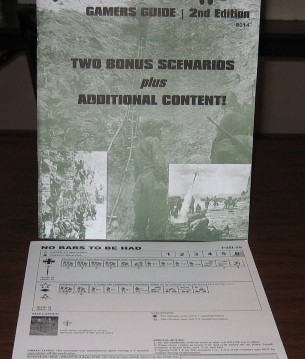