Fifteen months after his last release (including an interim where he announced, obviously prematurely, that he was shutting down Fanatic Enterprises) comes designer Paul Kenny’s Polish Campaign Pack (PCP), a collection of 10 themed scenarios featuring the 1939 Polish campaign.  Kenny remains one of only a small number of ASL scenario designers who have consistently evinced an interest in early war actions and certainly the Polish campaign, though lasting only a month, featured enough large-scale actions and hard fighting to fill a number of scenario packs.  So, as a topic, PCP is certainly welcome.

In terms of production quality, though, PCP represents a step back from Fanatic Enterprise’s previous release.  Though all of Paul Kenny’s scenario packs have been printed on light cardstock, apparently with an inkjet printer, the previous pack featured counter art as well as nationality color on the counters.  Inexplicably, this pack includes neither, reverting back to the sort of packs Kenny was printing in 2006.

The scenario card layout does share certain irritating features with earlier packs, though, such as all text being contained in boxes combined with an adamant refusal to put padding between the text and the box outline, so that text is jammed right up against the side of the box.  As is typical, there is little proofreading or quality control.  Text is poorly punctuated, font sizes change randomly (the 4-5-8 squads depicted in the OB of the first scenario, for example, are in a smaller font size than the 4-5-7 squads right next to them), unit representations vary (for example, sometimes a squad may be represented as 4-6-7 while at other times it may be 467), items are left off the scenario cards (such as FE180, where the Poles are given a single concealment counter; the actual number of “?” counters intended is 4; also the Pz IIIAs in the scenario should be Pz IIIDs and the German OBA is HE only).

Some of these complaints may seem picky, but the point is that  almost all of these issues can easily be spotted by even a modicum of attention to detail and proofreading.  There is just not enough quality control here.

SSRs are typically few in number or complexity, which can get people right into the action.  One scenario has OBA; no scenarios use Air Support or Night rules.  One scenario, FE177 (First Invasion of Germany), uses board FE1, which appeared in the Budapest Pack.

Of the scenarios, several present interesting situations.  FE177 (First Invasion of Germany) features a meeting engagement of sorts, with both Germans and Poles rushing to take a Polish border town (the German player wins by maintaining a toehold in the town).  Were it not for the board FE1 issue (because many people will not have that board), it would have the potential to be a good tournament scenario (if it proved balanced).   FE184 (Hurrah!) is interesting in that it depicts hot cavalry-on-cavalry action, quite a rarity in ASL.  FE185 (Assault on Fort IX) is also interesting, as it is a small scenario that features a German assault using pneumatic boats to cross a water-filled AT Ditch.

While it is impossible not to appreciate the enthusiasm for ASL consistently evinced by Paul Kenny, and he should be applauded both for his interest in under-appreciated areas of World War II, as well as his eye for interesting scenario situations, his indifference to quality control is a handicap to his scenario packs and creates as well some doubt as to whether sufficient attention was played to playtesting and development.  As a result, this product is recommended for people with a particular interest in the Polish campaign, but may not be of broader interest.

Since its release, the pack has had virtually no playings recorded on ROAR. 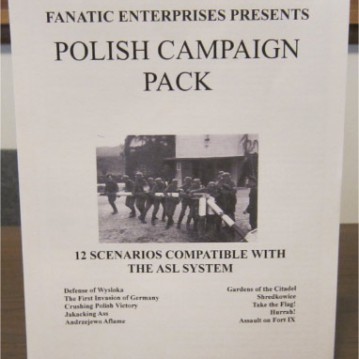